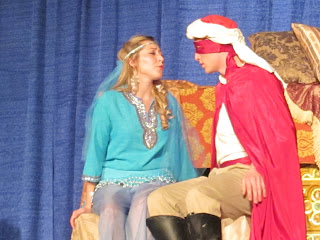 At a colonial French outpost in Morocco, young Margot – a guest of General Birabeau, governor of the province – longs for romance but never guesses that the general’s mild-mannered son Pierre is the notorious and to her, glamorous, Red Shadow, leader of the Riffs, the Moroccan fighters who are at odds with the French occupiers. Bennie, a society reporter and Susan, the general’s ward, are the comic lovers. And sultry harem girl Azuri, the secret mistress of Margot’s fiancée, Captain Fontaine, is determined to avenge her lover’s betrayal.

Casting was strong all around. Lauren Rose-King as the conflicted Margot delivered consistently striking work. Her “Romance” and “Sabre Song” were especially satisfying. Also outstanding was Brian Nathan as Bennie whose strong and incisive singing of the show’s pop numbers “It” and “One Good Boy Gone Wrong” were stylishly delivered as he made every word count. Iris Karlin played a particularly vivid Azuri, clearly relishing the sexy vamp aspects of the role, and demonstrating real temperament when her character was thwarted. Amy Maude Helfer was right on the button as soubrette Susan who’s so smitten with Bennie.

There was some post-show grumbling that Bennie was directed to play in too effeminate a manner, especially as that interpretation makes his interactions with Susan and harem girl Clementina all the more improbable. Yet, given the conventions of the era, it seemed to me stylistically sound, if somewhat off-putting for a contemporary audience.

In his Santa Claus-red garb (resourceful and generally attractive costumes courtesy of Lydia Gladstone), Erick Castille cut a reasonably dashing figure as the Red Shadow. And he sang the big numbers, including “One Alone” and the title song firmly and with apt style. Though in his Clark Kentish guise of Pierre, his Yul Brynner-like pate was distractingly out of period.

There was good work from David Seatter as General Birabeau, Daniel Greenwood as Margot’s suitor Paul, Kevin Ginter as The Red Shadow’s sidekick Sid, LaToya Lewis as Clementina, and Matt Ellison as Ali, even if ideally one would wish a sonorous bass for his part of the great “Eastern Love/Western Love” sequence.

I appreciated the way director Gary Slavin respected the original material, and some expeditious exceptions notwithstanding (like the dance music), performed a more authentic version than even the New York City Opera and Paper Mill Playhouse. Unlike the Herberts, LOONY allowed the script to play out without narration.

Last season’s three Victor Herbert gems at the Players were so successful the company needed to secure a location with greater seating capacity, and landed on the neo-Gothic locale below. The cushioned seats are definitely an improvement over the Players’ cramped wooden folding chairs, but with the building’s imposing arches and columns, and churchy ambience, there’s a corresponding loss of intimacy. But audibility was generally not a problem.

Small caveats about the venue aside, the quality of “The Desert Song” bodes well for LOONY’s next offering, Rudolf Friml’s “The Vagabond King” on February 17.