Women on the Verge of a Nervous Breakdown (Belasco Theatre) 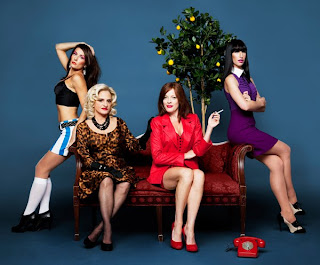 Don’t be put off by reports of a troubled preview period. After all, the point of previews is to iron out the kinks.

Composer-lyricist David Yazbek’s musical version of Pedro Almódovar’s 1988 film with its multi-strand plot has been wittily and cleverly put on stage with the kind of ensemble work that one is more accustomed to seeing overseas. Some have complained that the likes of Patti LuPone, Brian Stokes Mitchell, and Danny Burstein don’t have enough to do, but I most strenuously disagree. Not only to do they all have some great moments to shine, but they are each part of a satisfying organic whole.

Sherie Rene Scott is Pepa, a movie-dubber whose live-in lover Ivan (Mitchell) has walked out on her. Ivan’s crazy ex-wife Lucia (LuPone) hasn’t stopped carrying a torch for her ex, and is now vengefully stalking Pepa. Ivan meanwhile is carrying on with Paulina (de’Adre Aziza), the lawyer Lucia has hired in her suit against Ivan.

Lucia’s inhibited son Carlos (Justin Guarini) is hoping to break away from his domineering mother with girlfriend Marisa (Nikka Graff Lanzarone). And Pepa’s manic model friend Candela (hilarious, scene-stealing Laura Benanti) is crazed to the point of being suicidal after learning her lover is a terrorist. Her frenetic telephone patter number, as she leaves message after message on Pepa's answering machine, is a brilliant tour de force.

Under Bartlett Sher’s astute direction, performances are pitch perfect, and the show moves along like a well-oiled clock.

That precision is mirrored in Michael Yeargan’s ever moving set pieces complemented by Sven Ortel’s colorful projections and Brian MacDevitt’s terrific lighting all of which evoke the distinctive color palate of Almódovar’s world. One of the most delightful effects involves upbeat taxi driver Burstein’s speeding around Madrid with Pepa in her moments of crisis as digital projections of the city speed behind. Christopher Gattelli’s choreography contributes to the smooth flow.

LuPone, a very funny comic presence throughout even when she’s just purposefully traversing the stage, has a wonderfully touching courtroom breakdown, and the song that grows out of it, “Invisible” is superbly done, as is Mitchell’s big solo, “Yesterday, Tomorrow and Today.”

Mary Beth Peil is another plus as Pepa’s dotty concierge who offers her distraught tenant some pearly wisdom.

As the sanest of the characters, relatively speaking, Scott is the solid anchor of the proceedings, and it is her character that has the most palpable growth. Though her role is, on the surface, the least flashy, she's a winningly sympathetic character throughout.

Librettist Jeffrey Lane has done a solid job in translating Almódovar’s dark comedy to the stage. Yazbek’s songs – all with an appropriate Spanish tinge – bubble along cheerfully or ruefully, as the situation demands, and capture the the Spanish filmmaker’s spirit accurately.

In an age of jukebox musicals, we should be grateful for having a brand new score – and a quality one at that -- whose songs are so integral to the plot. Let’s hope it gets recorded.

And when you go, be sure to leave time to explore and admire every nook and cranny of the Belasco Theatre, now splendidly restored to its former glory.