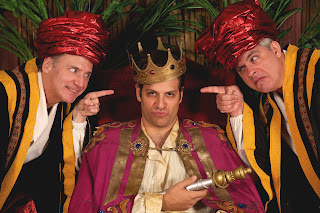 Since that recording, “Utopia” has gradually gained a footing among G&S societies and operetta groups like Ohio Light Opera and NYGASP itself. But its appeal is still specialized enough to warrant only a one-night mounting, albeit in semi-staged form. Attractively costumed (by Gail J. Wofford), it was, in fact, not far removed from a full production. There was even a 27-piece orchestra on stage if largely hidden from view.

Company director Albert Bergeret’s staging did little to improve the essential static quality of the first act wherein the premise of a tropical isle deciding to model itself along the lines of a British company limited is laid out, and a series of English dignitaries – the so-called “Flowers of Progress” (Michael Galante, Cameron Smith, Quinto Ott, Richard Alan Holmes, Michael Connolly, David Macaluso)-- explain (in song) how things work back home.

The second half – with its hugely infectious and atypical (for G&S) minstrel number and more emphasis on the romantic couplings of King Paramount’s newly Anglicized daughters -- was far more animated.

Among a highly proficient cast, there were some standouts. Holmes has sung Goldbury’s songs at NYGASP and sundry other New York venues, and owns the role, his renditions virtually definitive. The jaunty quartet Goldbury does with Lord Dramaleigh (Galante) and Nekaya (Sarah Caldwell Smith) and Kalyba (Amy Helfer) was a special delight.

David Wannen’s Paramount was imposing and clearly sung. Erika Person brought a dignified presence and creamy tone to her numbers. Laurelyn Watson Chase had the vocal chops for Princess Zara’s demanding vocal line, and Smith, contrary to the lyric of his comic second act opener very much “did himself justice.”

NYGASP veterans Stephen O’Brien and Stephen Quint did their best with scheming Scaphio and Phantis’s tiresome comic business, while Ott made a resonant Captain Corcoran.

Bergeret conducted stylishly, as always, the music slightly muted in the dry Symphony Space acoustic. But, on the whole, the singers had presence.

Some of Bergeret’s alterations to the text (co-credited to Holmes) were hokey or groan-inducing (a bit of double entendre concerning “Cox and Box,” for one), though the second act drawing room set piece staged, not simply with fashionably-gowned young ladies, but as a procession of G&S characters, was a cute, unobjectionable touch.

“The Yeomen of the Guard” and “Trial by Jury” (the latter sharing the bill with assorted G&S goodies) will be heard on December 5 and March 20 respectively, while the ever-popular “The Mikado” runs December 29 through January 2.

Photo credit: William Reynolds Print this post
Posted by Harry Forbes at 11:49 AM