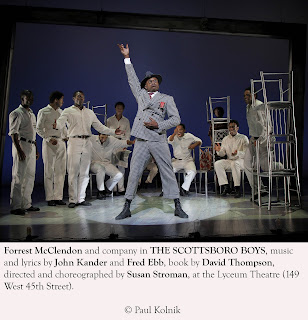 “The Scottsboro Boys” has made the move to Broadway from its sold-out engagement at the Vineyard earlier this year, via a stopover at the Guthrie in Minnesota. On the narrow stage of the Lyceum, it has lost very little of the intimacy of the smaller Off-Broadway venue.

Joshua Henry has replaced the excellent Brandon Victor Dixon as Haywood Patterson, the most prominent of a group of nine young men unjustly imprisoned on rape charges in 1931 in Alabama. I'm happy to report Henry is as fine as his predecessor, and brings strength and dignity to the pivotal role.

Director-choreographer Susan Stroman’s staging is, as many have already noted, among her best work, and beyond the clever and snazzy dancing we expect from her, has drawn excellent performances from her cast, including John Cullum as the interlocutor of the minstrel show that frames the narrative in the work, the final creation of composer John Kander and lyricist Fred Ebb before the latter’s death.

The rest of the Off-Broadway cast is mostly intact including Colman Domingo and Forrest McClendon as Mr. Bones and Mr. Tambo, the end men in the minstrel lineup (and, like Cullum, taking other parts along the way). The titular characters are played by Josh Breckenridge, Derrick Cobey, Jeremy Gumbs, Rodney Hicks, Kendrick Jones, James T. Lane, Julius Thomas III, and Christian Dante White.

All are impressive, with White and Lane doubling in drag as the boys’ accusers. Sharon Washington as a dignified, silent woman (her identity not revealed till the end) who watches the action from the sidelines is a lovely presence. Her character, though seemingly extraneous, also helps end the evening on a hopeful note.

From the exhilarating “Commencing in Chattanooga” which the boys sing on their fateful train journey as they set off in search of jobs to an ironic paean to “Southern Days,” the Kander & Ebb songs are tuneful and immediately accessible, though in the context of the bleak facts of the case, one can’t quite enjoy them as one can the numbers in “Chicago,” the Kander & Ebb show this most closely resembles in using a showbiz structure to tell grim events in an entertaining fashion. And it’s difficult to imagine them having a life outside the context of the show. (Barbara Cook won’t be singing “Electric Chair” at the Cafe Carlyle anytime soon!)

The production packed a wallop at the Vineyard in March. And now, with just enough little nips and tucks to make the narrative tighter, it's better than ever.