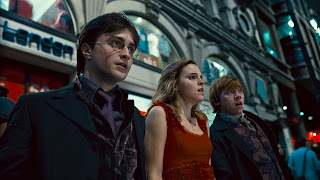 On the plus side, “Harry Potter and the Deathly Hallows: Part 1” bears all the quality hallmarks of the six films that preceded it. This has been a classy series from the get-go.

And as the series nears its conclusion with this penultimate chapter, one must admire again the prescience of the casting directors who picked Daniel Radcliffe, Rupert Grint and Emma Watson to play Harry Potter, Ron Weasley and Hermione Granger respectively in the first place.

These three have developed most impressively, along with their characters, their acting prowess ever more skillful with each new installment.

On the other hand, perhaps because J.K. Rowling’s sprawling concluding novel has been accorded the luxury (and money-making potential) of two longish films, director David Yates’ pacing here is rather leisurely, to put it kindly.

So, too, the whole feel of the film is different than the others, requiring a definite mental adjustment. It takes place, not at Hogwarts, but largely in the woods and myriad dreary London locations. Harry must, at all costs, stay hidden from the evil Lord Voldemort and his cohorts, the Death Eaters, who are now in control of not only Hogwarts but the Ministry of Magic.

Voldemort now only needs to annihilate Harry – the Chosen One -- for complete domination. Harry and his friends, for their part, must destroy the Horcruxes which contains parts of Voldemort’s soul and thus his immortality.

As they eke out a fairly dreary existence in the forest, Ron begins to resent his role in protecting Harry, who is also jealous of the puppy-love vibes he intuits between Harry and Hermione, leading to a serious rift among the close friends.

Voldemort – in the person of Ralph Fiennes – puts in an early appearance in the film’s opening and most fearsome sequence, which leaves no doubt of his dastardly intent. Though they have scant screen time, the other big British thespians are back, too, this time joined by Bill Nighy as the Minister of Magic and Rhys Ifans as Luna’s father.

Despite dullish patches, the film is obviously essential viewing for what will undoubtedly be a bang-up finale when Part II is released next summer.

(This film has been rated PG-13 by the MPAA for some sequences of intense action violence, frightening images and brief sensuality.) Print this post
Posted by Harry Forbes at 1:10 PM