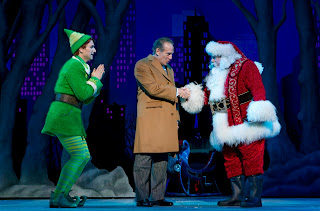 Though it might be tempting to dismiss this musicalization of the 2003 Will Ferrell comedy as a mere holiday trifle for the tourist trade, “Elf” proves a quite delightful, “real” musical, old-fashioned in the best sense, with much to offer.

Sebastian Arcelus is outstanding as the Farrell character Buddy, an orphan raised by Santa Claus (George Wendt. When Buddy learns he's not an elf, but human, he journeys from the North Pole to New York to find his birth father, a humorless publisher Walter (Mark Jacoby) now, after the death of Buddy’s mother, married to Emily (Beth Leavel). Their young son Michael (Matthew Gumley) doesn't believe in Santa Claus.

Buddy, green elf duds and all, ingratiates himself into the family – and Walter’s business – ultimately teaching everyone the true meaning of Christmas.

Matthew Sklar and Chad Beguelin, composer and lyricist respectively of the underrated musical version of “The Wedding Singer,” has written some very catchy tunes and often witty lyrics, and there are several showstoppers in an overall extremely attractive score.

These include “Nobody Cares About Santa,” a lament sung by the Christmas Santas in a Chinese restaurant after a long, unrewarding day; “The Story of Buddy the Elf,” a “Brotherhood of Man”-like production number wherein Buddy helps his dad out of a tight fix; Jovie’s determined “Never Fall in Love”; and a pair of very nice duets for Leavel and Gumley, both appealing: “I’ll Believe in You” and “There is a Santa Claus.”

Thomas Meehan and Bob Martin collaborated on the book, adapted from David Berenbaum’s film script, and it’s a savvy piece of work, only sometimes betraying a synthetic quality.

Casey Nicholaw’s direction is efficient and clever, and his choreography, particularly for the “Nobody Cares About Santa” number and “The Story of Buddy the Elf,” is great fun.

Arcelus is a totally winning Buddy, and the linchpin of the production. A brunette Amy Spanger makes the most of her cynical character who blossoms under Buddy’s adoration. Jacoby makes the Walter’s transformation from preoccupied businessman to demonstrative family man nicely convincing. There’s good work, too, from Michael McCormick as Walter’s hard-nosed boss, Valerie Wright as secretary Deb who shares a winning song-and-dance number with Arcelus, “Just Like Him.” And George Wendt delivers some of the funniest lines as Santa himself.