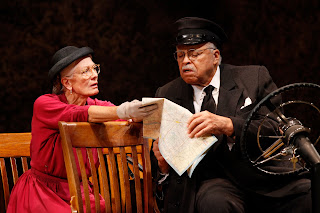 And how especially could it be otherwise with Vanessa Redgrave, James Earl Jones, and Boyd Gaines, all in peak form? I don’t believe any of them has ever been better.

In a series of short scenes spanning 1948 through 1972, Alfred Uhry’s Pulitzer Prize-winning play charts the relationship between Daisy Werthan (Redgrave), an independent-minded Jewish ex-schoolteacher, now a well-to-do widow, and the humble chauffeur Hoke (Jones) whom her son Boolie (Gaines) hires for her when she can no longer drive.

It’s a pleasure to see Redgrave in such a vital, feisty role after the heaviness of “The Year of Magical Thinking” and “Long Day’s Journey into Night” for there is a good deal of humor in the part.

Chief among the lighter moments is the scene where she confronts Hoke about the salmon he consumed without permission holding the can accusingly aloft with her long arm – all the while pointing to the wastebasket where he had discarded it – only to be completely deflated when she learns why her suspicion was ill-founded.

And we’re so accustomed to seeing Jones in authoritative roles it’s rather fascinating to see him take on such a docile, obsequious one, though one possessed of great inner strength and dignity.

Far from being outshone by those two pros, Gaines offers a richly textured portrayal of the go-between son far transcending what could be a merely functional role. This actor continues to amaze season after season with his great versatility.

It’s incredibly poignant to watch Redgrave and Jones at this stage of their careers, particularly in a play that has as much to do with aging as it does social issues and civil rights. Redgrave’s “Blow-Up” and “Camelot” and Jones’ “Great White Hope” and "Othello" may not seem to us who remember exactly like yesterday, but certainly not so very long ago.

Don’t miss the chance to see them together in this tear-jerking but also, grandly entertaining, vehicle.