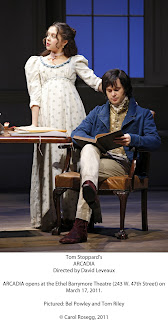 Tom Stoppard’s heady mix of chaos theory, determinism, thermodynamics, and the like has returned to Broadway in a production by David Leveaux which met with great success in London a couple of years ago, albeit with a different cast.

“Arcadia,” like most of Stoppard’s work, makes its audiences feel, by turns, smarter and dumber for the experience, though the play’s sometime denseness is balanced by a crowd-pleasing romantic setup, and the compelling mystery at the core of its parallel track narratives, both set at a Derbyshire country house, one in 1809, and the other in the present.

The former involves the romantic complications of Septimus Hodge (Tom Riley), tutor to the young lady of the house, 13-year-old Thomasina Coverly (Bel Powley). The latter involves two academics, Hannah Jarvis (Lia Williams), who’s written a best-seller about Lady Caroline Lamb, and Bernard Nightingale (Billy Crudup), an academic determined to prove, despite scant proof, that Lord Byron was once involved in a fatal duel there.

There’s also Chloe Coverly (Grace Gummer), the comely young lady of the house smitten with Nightingale, and her brother Valentine Coverly (Raul Esparza), a math scholar, who is working on the same theories as the precocious Thomasina did a couple of centuries before. The work flips back and forth between time periods on the same set (designed on this occasion by Hildegard Bechtler), and gradually we learn the truth of the 19th century events.

The original 1993 production with Rufus Sewell, Samuel West, and Felicity Kendal at London’s National Theatre is the one by which all others must be measured. It was quite splendid and hard to beat in terms of production values and aptness of performances. The subsequent New York mounting at Lincoln Center was excellent, but less definitive.

The current production, though accomplished and enjoyable on its own terms, has an uneven quality. For one thing, audibility is sometimes a problem, starting with the high-pitched tones of the otherwise engaging Powley. Her fellow Brits Riley and Williams are solid (Riley, in particular, anchoring the production), as are, on the American side, Margaret Colin as Thomasina’s imperious mother, Lady Crooms, and Byron Jennings as gardener Noakes. And Noah Robbins, Eugene in the ill-fated Broadway revival of “Brighton Beach Memoirs,” has a nice turn as both 19th century Augustus, and present-day mute Gus.

Just a tad unconvincing are Crudup (Septimus in the Lincoln Center premiere), fine actor that he is, who struck me as overly mannered on this occasion (but then so was Bill Nighy in the original), and the versatile Esparza who handles Valentine's convoluted math monologue with aplomb, but never quite convinced me he was the character.

Leveaux directs with as much clarity as the idea-heavy text and present cast allow.