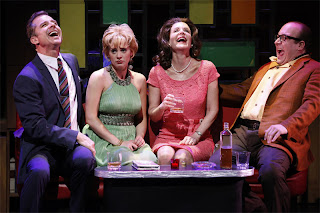 After reading some fairly tepid reviews for the Off-Broadway resurrection of Abe Burrows’ adaptation of Barillet and Gredy’s French stage hit, I think I can be forgiven for approaching Michael Bush’s production with dire foreboding.

But (surprise), though it may lack the polish of a slick Broadway retread – and the prospect of one should not be ruled out, considering the original with Lauren Bacall ran a staggering 1,234 performances! -- the property still demonstrates considerable appeal.

Right now, in fact, Jennifer Aniston and Adam Sandler can be seen on movie screens in “Just Go with It,” which is (read the fine print) nothing less than a reworking of “Cactus Flower.” As further testament to the appeal of Barillet and Gredy, the upcoming “Potiche” with Catherine Deneuve and Gerard Depardieu also originates from the pen of the prolific French playwrighting team.

You’ll recall that “Cactus Flower” is the story of Dr. Julian Winston (Maxwell Caulfield), a womanizing dentist and his long-term relationship with his good-hearted mistress Toni (Jenni Barber). Now, he’s finally decided he wants to marry her. The only problem is, he had originally told her that he was married with three kids to avoid commitment, and now Toni won’t accept his proposal unless she meets the wife, and hears for herself that the decision to divorce was mutual.

So Julian begs his starchy nurse Stephanie (Lois Robbins) to pose as the missus, and give Toni the assurance she needs. But Stephanie does, in fact, love him herself, and that fondness can’t help but shine through the charade when she dutifully visits Toni in the record shop where the latter works as a clerk. Empathetic Toni feels sorry for her, and, well, complications arise.

Those expecting a farce along the lines of “Boeing Boeing,” that other 60’s hit adapted from a French original, and seen a couple of seasons ago in Matthew Warchus’ smashing revival, will be disappointed. That was indeed a true farce in the door-slamming Feydeau manner. But no, this is better characterized as a romantic comedy.

The situations are amusing, rather than laugh-out-loud hilarious, at least not until the character-driven plot goes into high gear in the second act.

The cast knows what they’re about. I found Barber warmly sympathetic, channeling Goldie Hawn (her Oscar winner) just a tad, but creating her own character. Jeremy Bobb as Igor, Toni’s next-door writer neighbor who rescues her from a suicide attempt at the opening, is another bright spot. Brit Caulfield plays the philanderer well, and gets the American accent right. Robbins’ tart delivery helps you imagine what Broadway’s Lauren Bacall might have sounded like, and when the script calls for her to do so, she lets her hair down most enjoyably.

For all its entertainment value, this production does have the aura of a summer stock production about it, but a good one.

Anna Louizos’ set is attractive in a scaled-down way, and the scene changes are pretty deftly done, while 60’s hits blare forth, much as they did in Warchus’ “Boeing-Boeing.”

Beneath the lightweight goings on, there is actually some emotional substance, and a more savvy production might bring that into sharper relief. But this revival will do quite nicely until such a one comes along.