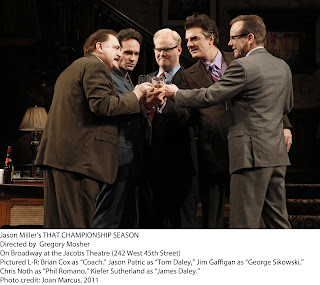 The five leads are accomplished enough, and yet, everyone seems to be dutifully going through the paces without truly inhabiting the roles. As a result, the parts seem more like cardboard characters than before.

This is the story of four members of a high school basketball team meeting at the home of their beloved, now terminally ill, Coach (Brian Cox) on the 20th anniversary of their victory. There’s George (Jim Gaffigan), the town’s corrupt and inept mayor hoping for reelection against a Jewish opponent; Phil (Chris Noth), the millionaire strip-mining businessman whom George hopes will bankroll his campaign; James (Kiefer Sutherland), the downtrodden school principal and George’s campaign manager who’s tired of playing second banana to George; and Tom (Jason Patric), James’ alcoholic writer brother.

Racial epithets, anti-Semitism, sexist remarks and plenty of cussing abound, in a way that was probably once shocking, but less so now that David Mamet and others have utilized four-letter words to more dramatically pungent effect.

In strictly by-the-numbers fashion, secrets are revealed, festering resentments come to the fore, and shouting matches turn to physical violence, particularly when it is revealed that Phil had a fling with George’s wife. Yet, by the end of the evening, the Coach is still going on about how they once gave “this defeated town something to be proud of.”

“24” star Sutherland in an impressive change of pace as the sad-sack functionary, and Patric, playwright Miller’s son, delivers Tom’s caustic remarks with apt bitterness, and takes a quite spectacular drunken tumble down the staircase at one pivotal point.

Noth’s initial bravado skillfully turns into tearful vulnerability, and Gaffigan believably inhabits his amoral character. The Scottish Cox – though utilizing, as he’s done before, an impressive American accent – can’t stop his native cadence from occasionally slipping through, detracting from authenticity of this blustering man who idolized both Teddy Roosevelt and Joe McCarthy.

Young as I was when I saw the original, I recall “That Championship Season” as a highpoint of my early theater-going. Though everyone is rightly saying how dated the play now seems, and goodness knows, long stretches of it certainly telegraph as excessively talky and clunky, I'm going to hang onto the belief that in different hands, the play’s original quality and power might still evident.