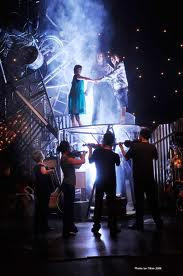 The Birmingham Stage Company’s production of David Almond’s award-winning novel about a 10-year-old boy who discovers an arthritic derelict in his parents’ dilapidated garage, is being seen in a very fine production at the New Victory Theatre. But it only runs through Sunday, so you’ll have to hurry.

Almond first dramatized his work for a 2003 Trevor Nunn production, and his novel has already been adapted as an opera and a 2009 TV film. The book received the Whitbread Children's Book of the Year Award, won a CILIP Carnegie Medal, and was judged one of the ten most important children's novels of the past 70 years.

Michael’s prematurely born baby sister is gravely ill, prompting fears of death and loneliness, and somehow Michael’s anxieties about the future dovetail with his secret discovery of the stranger in the garage. He makes friends with the free-spirited home-schooled Mina whose mother (Ellen Callender) has raised her on William Blake. Michael eventually turns to the resourceful Mina for advice when Michael’s father (Colin R. Campbell) announces his intention to raze the garage.

Both father and mother (Charlotte Palmer) are absorbed in the fate of their infant, but are not unmindful of what young Michael’s apprehension.

I won’t reveal how the narrative unfolds, but this is a very moving, mystical story, beautifully acted all around. Almond has a uniquely compassionate world view, and though the story may be targeted for children, make no mistake: the story and presentational style are completely absorbing for an adult audience.

The performances here are uniformly excellent. The enigmatic Skellig is played by Birmingham Stage Company Manager Neal Foster, who handles the multifaceted aspects of his character with aplomb. Michael and Mina are played by older actors Dean Logan and Charlotte Sanderson, rather like the young characters in “Blood Brothers,” and they are both extremely touching.

Jak Poore’s music is played by the cast members, much like a John Doyle production. Jacqueline Trousdale’s ingenious set, anchored by the imposing junk heap of a garage, effectively delineates Michael’s public and interior worlds.

Phil Clark directs with fluidity and imagination. There were rather more adults than youngsters at my performance, but there was nary a peep from the latter during either of the acts, the ultimate compliment. Adults could be heard sniffling towards the end, however.

The production is a gem, too good really for its short run.