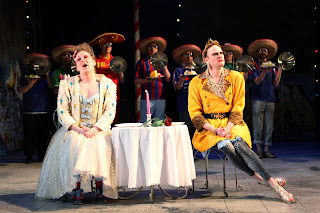 For most of the first act, I feared Shakespeare was fighting a losing battle with over-the-top slapstick shenanigans and rather too much extraneous business.

But by Act 2, the visiting Propeller company’s South American-set riff on the Bard’s earliest comedy caught me in its crazy spell, especially when the frenetic misunderstandings surrounding two sets of twins separated at birth and now operating at cross purposes in the same town, reached fever pitch. And does it ever!

Propeller uses an all-male cast, not so much for camp effect (though Robert Hands as Adriana and Kelsey Brookfield as a va-va-va boom Courtesan certainly fit that bill), but in order to give present-day audiences something of the texture of the original female-deprived productions.

Getting back to the extraneous business, a faux mariachi band is a constant stage presence, and provides musical entertainment before and after the performance, and even in the lobby during the interval where, zanily, the strains of “Material Girl” mingle with more traditional Mexican rhythms. Leading the audience back for the second act, they chant an intentionally dopey mantra of “Julio Iglesias” and “Ricky Martin.” Finally, Dominic Tighe as the cheesiest of the singers (and the Officer in the actual play) serenades a lady in the front row with “The Girl from Ipanema.”

Most seemed to find the conceit fun, and a woman remarked to her companion as she made her way back to her seat, “That was the best intermission ever!” I confess I found it just a tad wearying.

In any case, though all this may have precious little to do with Shakespeare, it nonetheless provides an inventive backdrop to a generally accomplished reading of the text, some overly rushed and shouted passages notwithstanding.

The Bard based the play on Plautus, but we’re a long way from Ancient Rome here. The setting is said to be inspired by holiday package tours of the 1980s. I might not have figured that out without reading a background piece about artistic director Edward Hall’s intentions, but never mind.

Richard Clothier and John Dougall as the Duke of Ephesus and old Aegeon, the Syracuse merchant get things off to a traditional start, as the latter, arrested for daring to venture into enemy territory, relates how he was separated from his wife and one of his twin sons, both named Antipholus, during a shipwreck years before. And he also tells how their twin servants, each called Dromio, suffered a similar fate. Dougall recites his monologue with appropriate gravity.

But once the farcical mayhem begins – with Antipholus of Ephesus’ wife (Hands) mistaking the twin (Dugald Bruce-Lockhart) for her husband (Sam Swainsbury), and the former showing a romantic interest in her sister Luciana (David Newman) -- knockabout clowning prevails. That includes the confusion over some extended business about a gold chain delivered to the wrong Antipholus, driving the goldsmith and merchant to demand their payment.

But whatever your take on the company’s overall approach, there’s no denying the cast is extremely accomplished. Swainsbury’s rapid fire accounting of events is breathlessly funny. Hands gives the nagging Adriana considerable humanity beyond the belly laughs. Tony Bell as evangelical charlatan conjurer Pitch stops the show when he comes on to exorcise Antipholus, and improbably breaks into a gospel number. And the two Dromios (Richard Frame and Jon Trenchard) are amusing clowns who easily win the audience’s affection.

The final revelation scene – one of Shakespeare’s most protracted -- still touches the heart, confirming the essential integrity of Hall’s approach.