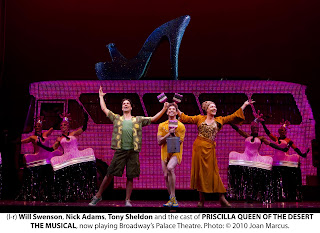 Though technically one of those jukebox music so despised by all true musical aficionados, this adaptation of the 1994 Australian film -- already a smash success not only Down Under, but in London and Canada -- is solid entertainment, and features a superb performance by Tony Sheldon, who’s been with the production from the beginning. He accomplishes the what-might-have-been-thought impossible feat of equaling Terence Stamp’s impressive performance in the movie.

His Bernadette is one of three drag queens – Tick (Will Swenson) and Adam/Felicia (Nick Adams) are the others -- who leave their gig in Sydney to travel across the desert on their own bus (the titular Priscilla) to perform in distant Alice Springs. Tick has talked them into headlining at the club run by his ex-wife (Jessica Phillips). Of course, Felicia and Bernadette had known nothing of his previous alliance, and Tick keeps from them the fact that he has a young son (Ashton Woerz at my performance).

In the course of their journey, they encounter an assortment of colorful locals, including some pretty rough characters, and an empathetic middle-aged mechanic (C. David Johnson) and his uninhibited wife (J. Elaine Marcos), who outdoes the trio with her X-rated impromptu act.

The score is comprised totally of pop hits, used both as onstage numbers, and character songs. The show opens with “It’s Raining Men,” sung by the three celestial Divas who descend on clouds from above to comment on the action, or simply provide harmonious backup. And another drag performer does “What’s Love Got to Do with It” onstage in the Sydney club.

But when Will, alone in his dressing room, sings a heartfelt "I Say a Little Prayer" in tribute to his distant son, the audience titters. The familiar song strikes a false note in this context, and bodes ill for the rest of the evening. But happily, the songs that follow are far better chosen.

Much has been made of how the show has been made more palatable for American audiences, with family values taking precedence over the more outrageous elements. But, in fact, I found the show to be a faithful adaptation of the movie which always had, at heart, Tick’s needing to return home to his son. A more noticeable alteration is the downplaying of Aussie accents, at least from the film.

Still, I couldn’t help but marvel at how much better this is – as an adaptation – than “Legally Blonde,” which occupied the Palace stage not so long ago, and has now, unaccountably, picked up a slew of Olivier Awards for its London production.

I hope Douglas Hodge’s having won last year’s Tony for a similar role in “La Cage aux Folles” doesn’t undercut Sheldon’s chances this year, for he gives a truly great performance. Though Tick is ostensibly the leading character, and Swenson does fine work, as does Adams who completes the triumvirate with a good, audacious turn, Sheldon’s more textured Bernadette can’t help but dominate.

Simon Phillips directs the book by Stephan Elliott and Allan Scott at a lively clip, and the musical numbers come in fast profusion, with flashy choreography by Ross Coleman. I would have preferred a more nuanced sound palate than the over-amplified work designed by Jonathan Deans and Peter Fitzgerald, but at least the dialogue scenes are pitched at a more sensible level, and allow you to be fully absorbed in the story.