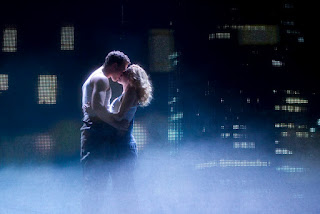 “Ghost the Musical” is a super slick but resoundingly empty musical based on the popular 1990 film about a young banker killed in an apparent robbery who tries to save his grieving fiancée from imminent danger with the help of a heretofore bogus psychic.

But against all the gorgeous high tech wizardry, cast members Richard Fleeshman and Caissie Levy who recreate the roles of Sam and Molly they originated across the pond, and Bryce Pinkham as their friend Carl, barely have a chance to register, and come across as mere ciphers.

The exception is Da’Vine Joy Randolph playing Whoppi Goldberg’s Oscar-winning movie role of the reluctant medium, Oda Mae Brown. She goes a bit too far in the extrovert direction, but she’s the only person onstage supplying the show with any juice, and her second act “I’m Ouuta Here” is the most satisfying number overall. That song comes relatively late in the show when the story inevitably starts to grab you, despite the numbing vacuity of all that’s come before.

Bobby Aitken’s sound design is annoyingly loud for both music and dialogue, suggesting a desperate attempt to ramp up the excitement level.

Though people are fond of the movie, the story is basically a downer – dealing, as it does with death and betrayal, and the score – music and lyrics credited to Dave Stewart and Glen Ballard, book and lyrics to Bruce Joel Rubin (who won an Oscar for the screenplay) -- is purely generic. Hy Zaret and Alex North’s ‘Unchained Melody,” Sam and Molly’s theme song, easily trumps the bland new material.

The property gains nothing by its musicalization, joining an ever-growing list of pointless screen-to-musical stage adaptations.

The Asian tourist sitting next to me with his daughter marveled at the effects, but at the beginning of the second act, observing that fully half of the row in front of us chose not to return to their seats, pronounced with all the ancient wisdom of the East – “I think movie better.”