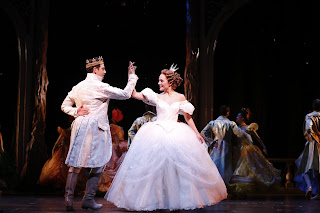 There have been numberless stage versions of Rodgers & Hammerstein’s 1957 television version of “Cinderella,” originally written for Julie Andrews, but remade twice on the small tube with Lesley Ann Warren and Brandy respectively in the ensuing decades.

Shortly after the original telecast, the show was done in London as a pantomime with Tommy Steele starring above the title. Closer to home, the New York City Opera mounted perfectly respectable straight-forward versions in both 1993 and 2004.

But this current version with its witty new book by Douglas Carter Beane with additional, lesser-known songs from the R&H songbook, trumps those. One might have thought that after his hilariously campy adaptation of the flop film “Xanadu,” Beane might have been tempted to go too far in the camp direction. But no, he’s left the original elements lovingly intact, just as William Ivey Long’s costumes are solidly traditional, and what Beane has added, in terms of subplots and humorous dialogue, provides a wonderful freshness.

Laura Osnes, in her fourth major R&H role in New York, makes the perfect Cinderella, exuding genuine goodness and integrity, looking great as both waif and glamorous mystery woman, and singing like a dream. Santino Fontana, who has proven such a fine dramatic actor in “Sons of the Prophet” and “Brighton Beach Memoirs,” makes a delightful Prince, boyish and ardent, and like Osnes, possessed of the requisite style for the score. In Beane’s rewrite, the Prince becoming his own man is a major theme, and Fontana’s plays that maturation beautifully.

Harriet Harris surpasses the amusing wickedness of her Mrs. Meers in “Thoroughly Modern Millie” as the Stepmother (and has some of Beane’s best lines), while Marla Mindelle and the very funny Ann Harada are well contrasted step-sisters, not as terrible as in other versions of the story. The King or Queen have been excised but Peter Bartlett is a hoot as a scheming advisor to the orphaned Prince.

Victoria Clark almost steals the show as the fairy Godmother, though she first appears as a slightly mad neighboring crone before transforming into a resplendent beauty. She sings gorgeously, including an R&H rarity, “There’s Music in You.”

Both her transformation and Cinderella’s are splendidly executed, each effect earning well deserved applause. Impressive as they are, those and the other magical moments are accomplished without any ostentatious high-tech trickery. There’s an appropriately old-fashioned approach throughout right down to set designer Anna Louizos’ leafy foliage atop the proscenium to the fox and raccoon puppets that befriend Cinderella, and could have stepped out of a 1950s TV kiddie show. The appearance of Cinderella’s coach and other accoutrements and the subsequent ride to the ball accompanied by “Impossible” are immensely satisfying.

The same can be said for Josh Rhodes’ choreography, most especially the ball sequence and the hunt for Cinderella at the start of the second act.

Rodgers’ music has been lovingly orchestrated by Danny Troob, with full respect for the original.

This is ideal family entertainment, and as with the best of such shows, proves fully satisfying for adults who love musical theater, whether or not they attend with a little princess in tow.