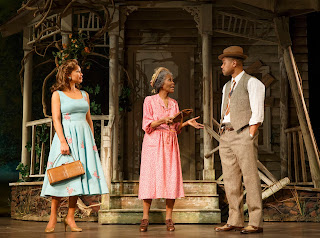 What a lovely production this Horton Foote revival is in every way: beautiful to look at (particularly the last scene, thanks to Jeff Cowie’s artful set design), immensely moving, and wonderfully acted by all. But the crowning glory is the superb performance of Cicely Tyson. The role of Carrie Watts was written for Lillian Gish who did it on television and soon after on stage, and has since been played to acclaim by Geraldine Page (on film) and Lois Smith Off-Broadway.

Whatever Tyson’s age (sources place her anywhere from 80 to 88), she is simply a marvel, as she dominates almost every scene. Carrie lives with her good-natured son Ludie (Cuba Gooding, Jr.) and feisty daughter-in-law Jessie Mae (Vanessa Williams) in a small Houston apartment, but yearns to return to her home town of Bountiful, TX just once before she dies.

Carrie has tried to run away once before, much to Ludie and Jessie Mae’s consternation, and by the end of the second scene of the first act, the wily old lady has succeeded, thus beginning an eventful journey.

Along the way, she befriends sweet young Thelma (lovely Condola Rashad) who’s on her way to visit her parents while her husband is off to war, and the conversations between the two are beautifully handled.

Gooding makes an auspicious stage debut, earnestly trying to keep the peace between his stubborn mother, and out-of-sorts wife, and is quite magnificent in his moving final scene. Williams skillfully shows that beyond Jessie Mae’s fretful discontent about her unexciting life, she genuinely loves Ludie, and cares for Carrie for more than just the monthly pension check on which the family relies.

Under Michael Wilson’s sensitive direction, everyone does exemplary work here, including Arthur French as a bus station attendant, and Tom Wopat as a sympathetic sheriff whom Carrie encounters along the way.

The racial change – akin to that of recent productions of “Cat on a Hot Tin Roof” and “A Streetcar Named Desire” – works just fine here with no sense of strain. Foote’s themes of longing for home, and returning to the land are still potent.

As the crafty house-bound lady of the first scene to the determined traveler whose sincerity and determination overcomes all obstacles, Tyson is a continual delight. She is in complete command in a performance notable for its utter naturalness. I imagine that Laurette Taylor’s legendary Amanda in “The Glass Menagerie” was something akin to what Tyson accomplishes here.