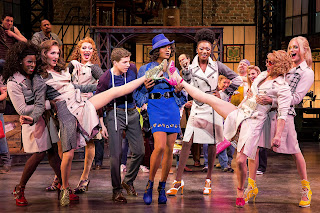 The 2005 British film upon which this very winning musical is based concerns a venerable English shoe factory fallen on hard times and reinvigorated by Charlie Price, the reluctant son who takes over after his father death. A chance meeting with a drag performer named Lola inspires Charlie to eschew the factory’s conservative shoe line in favor of the titular stiletto-heeled footwear. The film was charming, and it had a superb performance by Chiwetel Ejiofor as Lola.

In its new incarnation, the property scores high in every department. With a bracing score by Cyndi Lauper, a savvy book by Harvey Fierstein, and a first-rate cast and production team, the show, which had its premiere in Chicago last fall, honors the film, and improves on it. I think this may be the one to beat in the musical categories come award time.

Broadway veteran Billy Porter as Lola is simply phenomenal, filling the considerable shoes of Ejiofor in the film and then some. This is the proverbial role of a lifetime. For the first part of the show, he’s in full-out extroverted glory as performer Lola, but as the story gets going, he dispenses with the drag (at least for a time), and displays extraordinary vulnerability. But whether singing, strutting his stuff, or breaking your heart with a wrenching ballad, he’s superb.

And he’s matched every step of the way by Stark Sands as the factory owner who, appearances to the contrary, has many of the same issues. A fine dramatic actor, as we recall from his role in the World War I drama, “Journey’s End,” and a potent musical performer (“American Idiot”), this role allows him to demonstrate both aspects.

The cast is uniformly good, but there’s another standout turn from Annaleigh Ashford as one of Charlie’s supportive mates at the factory. She stops the show with her hilarious “The History of Wrong Guys.”

Fierstein’s book (based on Geoff Deane and Tim Firth’s screenplay) poignantly limns the underlying theme of sons coming into their own in light of early disapproval from their fathers.

Lauper’s score is totally engaging, and ranges from high octane numbers in Lola’s club and rousing ensemble numbers (“Sex Is in the Heel”) at the factory to touching ballads, like Lola “I’m Not My Father’s Son” and Charlie’s eleven o’clock number “The Soul of a Man.” (Lola gets an eleven o’clock showstopper, too, with “Hold Me in Your Heart,” performed in full-out diva mode.)

Jerry Mitchell’s direction brings out all the thematic father-son conflict, and his choreography is outstanding, including an eye-filling number on the conveyer belt in “Everybody Say Yeah.”

David Rockwell’s scenic design ranging from from the factory to the drag club to a Milan runway is enjoyably inventive; Gregg Barnes’ working class and high camp costumes delight the eye; John Shivers’ superior sound design allows you to hear all the lyrics without blasting you out of your seat. Stephen Oremus’ musical supervision, arrangements and orchestrations do Lauper’s score proud.

Picture an amalgam of “La Cage aux Folles” (in its drag elements), “The Full Monty” and “Billy Elliott” (with its industrial England working class folk succeeding against all odds theme), and “Hairspray” (in its joyous insouciance), and you’ll have the general idea.

I have no doubt “Kinky Boots” will be as big a hit as all of those others, both here and abroad.