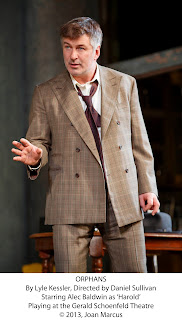 This is a superb revival of Lyle Kessler’s 1983 play about co-dependent brothers in North Philadelphia – Phillip, a seemingly simple-minded recluse who never ventures outdoors, and Treat, a thief who earns their keep through a series of daily muggings – and Harold, a well-heeled older man Treat brings home to rob, after which he decides to kidnap and hold him for ransom.

Ben Foster and Tom Sturridge are the brothers, and Baldwin the putative victim, and all three of them are phenomenal. Baldwin, a great stage actor, submerges his “30 Rock” persona so that one totally accepts him as the as a woozy drunk waxing sentimental over both his native Chicago and Hollywood's Dead End Kids.

Foster -- who replaced Shia LeBeouf during rehearsals – and was so outstanding in films like “The Messengers” and “3:10 to Yuma,” is compelling as the thuggish Treat, while Brit Tom Sturridge is quite sensational as Phillip. Apart from bearing not a trace of his actual English accent, he creates an endearingly vulnerable creature in a performance of remarkable physicality leaping, as he does, down stairs, over the banister, and from sofa to window ledge with animal-like agility.

Kessler’s play, with its characters yearning for family and paternal/filial bonding, has several neat twists, a solid classical structure, some wonderfully funny lines, and a suspenseful dramatic arc. As the relationships among the three shift, Kessler reveals the neediness of all three men. (And yes, Harold, too, is an orphan.)

John Lee Beatty’s large, decrepit house perfectly sets the scene, and evolves along with the characters.