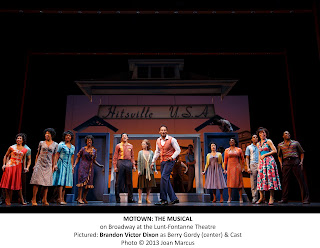 This hagiographic biography of record mogul Berry Gordy, founder of the titular hit-making label, may not be the stuff of peerless drama (or even “Jersey Boys” for that matter), but as a showcase for the best of Motown music and the artists who made their name there, “Motown: the Musical” is a thoroughly entertaining show compiled with considerable skill.

Though the book -- credited to Gordy himself and based on his “To Be Loved: The Music, The Magic, The Memories of Motown” -- tells his story is the most simplistic terms, it provides an ideal vehicle for stringing together all the popular hits and beloved artists in a remarkably seamless, enjoyable way.

The first part of the show which dramatizes Gordy’s early struggles (nothing too downbeat, however) – with The Temptations, The Four Tops, Marvin Gaye, Mary Wells, Martha and the Vandellas, and Smokey Robinson, appearing in dizzying succession is the most engaging. The first appearance of Diana Ross and her friends – stage-struck high school students begging for a break – is charming, though ironically, as the Supremes story begins to take center stage, and the relationship between Ross and Gordy moves into sharper focus, the show surprisingly loses some of its momentum.

Interest lifts again with the introduction of The Jackson Five. And it is amusing to observe the audience responding to Raymond Luke, Jr. as young Michael as if he were the real thing, but that phenomenon was par for the course all evening.

Diana Ross’ emergence as a solo artist with lengthy recreations of her live appearances and those mawkish set-pieces “Reach Out” and “Ain’t No Mountain High Enough” (with audience participation) rather bring the interest level down again, but admittedly receives a warm response.

Valisia LeKae does a credible Diana Ross at all stages, though (as with all impersonations of famous artists) doesn't quite capture the true magic. But, across the board, the entire cast is admirable in their impersonations, many of the ensemble playing multiple artists with skill.

Charl Brown and Bryan Terrell Clark do well as Robinson and Gaye respectively, and they emerge as the other major players in story.

Brandon Victor Dixon makes a sympathetic Gordy, and sings impressively in the sections of the book where characters break into off-stage song.

Peter Hylenski’s classy sound design adds to the polish of this unabashed jukebox musical which delivers a consistently fine earful.