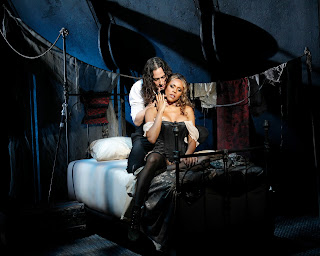 Despite a not insubstantial original run, and a genuine cult following, Frank Wildhorn’s bid for success in the “Phantom”-like musical sweepstakes was and continues to be a decidedly second rate work: the Robert Louis Stevenson story told in blunt uncreative terms, with the occasional plastic ballad thrown in along the way, not one of which is even remotely in the Lloyd Webber or Schönberg class.

Nonetheless, here it is on Broadway once again, albeit for a limited run. The current revival, which has set up shop at the Marquis Theatre for 13 weeks after a 25-week tour, is rather skimpy on the production side, despite some fancy lighting effects (Jeff Croiter) and projections (Daniel Brodie). (Tobin Ost designed the sets and costumes.)

But, to give credit where it’s due, stars Constantine Maroulis and Deborah Cox as the schizoid Jekyll and prostitute Lucy respectively are quite good, dodgy English accents aside. (Strong-voiced Maroulis succeeds well enough in contrasting the posh-sounding Dr. Jekyll and his crazed alter ego Mr. Hyde sounding rather like John Lennon as the latter.)

Both stars give their all and work up as much drama as book writer Leslie Bricusse’s sketchy script will allow, apart from the final third of the second act which contains some genuine tension, but it’s too little, too late.

Cox is particularly appealing, and gives originator Linda Eder a run for her money. But I’d much prefer to see her take on Aldonza in “Man of La Mancha” or Nancy in “Oliver,” to name a couple of superior lusty wench roles. Still, she does a fine job with “Someone Like You,” “Bring on the Men,” “A New Life,” and (in duet with Teal Wicks as good girl Emma) “In His Eyes.” And she projects a sympathetic characterization throughout.

The other cast members including Laird Mackintosh as Jekyll’s friend John and David Benoit as a corrupt bishop, as well as Blair Ross, Jason Wooten, Brian Gallagher, and Mel Johnson, Jr. are all adequate in their cardboard roles. It’s very nice to see Richard White, erstwhile dashing lead in numerous musicals and operetta, here as Emma’s father, a thankless role.

Ken Travis’ sound design goes way over the top at the big moments, rendering the stars’ key numbers cold and impersonal. They might as well be lip-synching to prerecorded tracks for all of the natural vocalism they are able to convey across the footlights.

The reliable Jeff Calhoun’s direction and choreography get the job done.