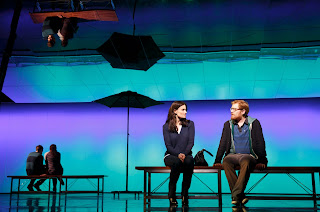 This engaging musical by the “Next to Normal” team of Tom Kitt (music) and Brian Yorkey (book and lyrics) in built on the novel premise of how the life of a 39-year-old divorcee who has returned to to New York plays out (or might have played out) based on her actions at a certain moment in Madison Square Park.

The ensuing narrative takes a parallel track following protagonist Elizabeth – played most winningly by Idina Menzel – as she pursues her dream of becoming an urban planner and, alternatively, a workaday teacher who marries a good looking military doctor (James Snyder), opting for domesticity. As the former, she’s called Beth; as the latter, she’s Liz (and wears glasses much of the time). Neither road is free of unhappiness, as she discovers. And yet, without giving anything away, they will perhaps bring her to the same place.

As Beth, she finds herself attracted to her married boss (and former schoolmate) Stephen (Jerry Dixon), and acquires a devoted assistant Elena (Tamika Lawrence). In Liz’s circle, Lucas is able to commit to boyfriend David (Jason Tam).

It’s sometimes a bit confusing to figure whose story we’re watching but things get clearer as the evening progresses.

The cast is very fine, with Menzel the warm center. Her singing is smooth and powerful throughout, and she has a big eleven o’clock number where she pulls out all the stops, but what’s equally impressive here is her acting.

And indeed, the musical succeeds as much as absorbing drama thanks to Yorkey’s book and Michael Greif’s sensitive direction. Kitt’s tunes are quite attractive on first hearing, and the songs pretty much all convey the central themes of fate and chance which can be, at times, genuinely thought provoking, if at others, repetitive and a bit obvious.

The piece is ever so stylishly designed by Mark Wendland, with sleek urban patterns topped by a mirrored screen reflecting the action below, with very pleasing lighting by Kenneth Posner. Brian Ronan’s sound design is exemplary, wonderfully clean and natural.