A Raisin in the Sun (Ethel Barrymore Theatre) 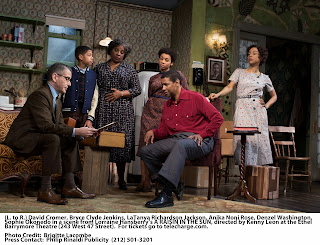 Yes, Denzel Washington may be 20 years too old for the part of Walter Younger – the troubled chauffeur who hopes to escape the roach-infested tenement apartment he shares with his newly pregnant wife Ruth (Sophie Okonedo), young son Travis (Bryce Clyde Jenkins), younger sister Beneatha (Anika Noni Rose), and mother Lena (Latanya Richardson Jackson) – but, in the role originated by Sidney Poitier and last played on Broadway by Sean Combs a mere 10 years ago, he is magnificent and the years matter not a jot.

The Combs revival, in fact, had many excellent performances (Phylicia Rashad, Audra McDonald, Saana Lathan), and was finely directed, like this one, by Kenny Leon, but Combs’ earnest but workmanlike performance was a weak, if not disastrous, link. Leon’s current mounting is well-nigh flawless across the board with tremendous work from all concerned and therefore an even sharper realization of Lorraine Hansberry’s classic, one which with each viewing seems to affirm that status.

Okonedo projects quiet strength and dignity as Walter’s neglected wife, Rose is utterly endearing as the would-be medical student who rails against cultural assimilation under the guidance of a fervent Nigerian student (a charismatic Sean Patrick Thomas), and Jackson – who replaced previously announced Diahann Carroll in rehearsals -- superbly embodies the mighty bedrock of the Younger family.

Other key roles are perfectly taken by Jason Dirden as Beneatha’s suitor George; Stephen McKinley Henderson as Walter’s partner in a scheme gone awry; and actor/director David Cromer in the role of the smarmy emissary from Clybourne Park, the white neighborhood where Lena hopes to move the family.

Before the play, there’s a fascinating interview which Hansberry did with Studs Terkel in 1959, a lovely tribute to the playwright who died far too young.

A final word about Denzel Washington: years ago, I used to regularly encounter a Fordham professor named Robert Stone when we’d walk our dogs in Central Park. Stone was a former actor himself; he’s the mute soldier playing the harmonica in the film “Stalag 17.” I remember how he would rave about his former student, young Denzel, and his telling me how he called on all his theater contacts to come see this extraordinary young man in the school’s production of “Othello,” a move that launched Washington’s career. I couldn’t help but think how mighty proud the late Stone would be of his protégé in this production, featuring, as it does, some of the very best work of the actor’s career.