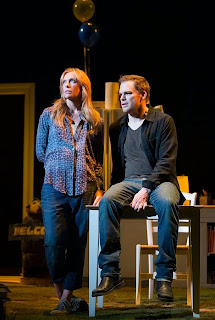 Toni Collette, Michael C. Hall, Tracy Letts, and Marisa Tomei comprise the flawless ensemble of Will Eno’s poignant comedy about communication (or, rather, the lack thereof), as a new couple – Bob (Hall) and wife Pony (Tomei) – move down the street from longtime residents John (Letts) and Jennifer (Collette) in “a smallish town not far from some mountains.”

As it happens, the surnames of both couples are Jones. But, as events play out, they have more in common than their names, or as their contrasting personalities would suggest. (And I’m not sure which, if either, the “realistic” one is.) At the start, Jennifer and John are having a stilted conversation in their yard. Jennifer suggests that they never “talk”; John counters that that’s just what they’re doing. Into this stalemate, comes the brash younger couple bearing a neighborly bottle of wine.

The latter seem eccentric almost to the point of menace, as their fractured speech patterns continually catch their hosts off-guard. Pony would seem to have a serious case of ADD; John seems the master of the non-sequitur. Both ask to use the bathroom almost as soon as they arrive. One wonders if this will be a home invasion sort of story. But no, they soon emerge, and conversation continues along its quirky path.

The taciturn Bob’s utterances seem logical if usually terse, but he clearly has his own issues including a degenerative disease that seems akin to ALS.

The laughs come frequently, and each scene generates warm applause, but as the narrative darkens, and an ominous tone pervades and though Eno – with his brilliantly elliptical dialogue -- sustains the humor, the essential loneliness, isolation, and fear of mortality facing these characters moves to the fore.

Sam Gold directs with great sensitivity to the shifting moods.

David Zinn has designed an ingenious set that serves as both Jennifer and Bob’s yard, and John and Pony’s kitchen. Massive trees flank the central playing area, mostly in shadow until near the end when the light of day reveals their lushness. (Mark Barton did the mood setting lighting.)

Kate Voyce’s costumes and Leon Rothenberg’s sound design (including some increasingly portentous music between scene changes) are on the same high level.