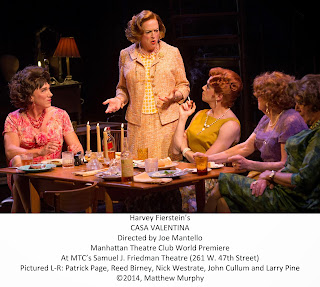 Inspired by real life events, Harvey Fierstein’s first non-musical play in almost 30 years, inspired by the book “Casa Susanna” by Michel Hurst and Robert Swope, concerns a resort in the Catskills, circa 1962, where straight men, usually married, could indulge their proclivities for dressing in women’s clothes.

The premise is intriguing, and Fierstein’s play demonstrates his great skill as a playwright, but despite his efforts to build a dramatic arc to the story – showing us the trepidation of a novice to the group helps the audience enter this unique world, and an impending legal threat over some intercepted pornography adds tension, as does a later revelation of a vulnerability in the tight-knit group – there are too many talky and static patches. These include some interesting arguments about cross-dressing and homosexuality, but they rather undercut the drama.

Still, there is much to admire here, as the acting is marvelous across the board. Patrick Page is the manager of the resort, assisted by Mare Winningham his understanding wife. Gabriel Ebert (Tony winner for “Matilda”) is the trembling newbie who blossoms under the makeover ministrations of the ladies (an entertaining scene).

Reed Birney, looking something like mid-period Bette Davis, is especially terrific as hard-as-nails activist Charlotte who is determined to legalize a sorority she envisions for men of the cross-dressing bent and, in so doing, to distance them from the homosexual community. And there’s stout Tom McGowan as clowning Bessie; Nick Westrate as chic Gloria; and John Cullum and Larry Pine poignant as the old-timers Terry and Amy. Lisa Emery adds a cold dose of some real-world reality in her late entering role.

Flaws in the text notwithstanding, Joe Mantello directs expertly. With so many humorous, touching and dramatic moments, and all those fine performances, it’s a pity that the play doesn’t feel quite there, with a rather inconclusive and unsatisfying ending, too.