The Cripple of Inishmaan (Cort) 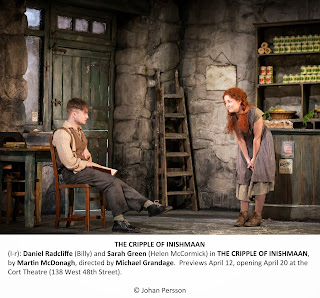 Martin McDonagh’s 1996 play, first seen here at the Public in 1998, affirms its classic status in this absolutely splendid production from the Michael Grandage Company which has been imported intact after its West End run.

Daniel Radcliffe who, with each new film and stage project, impresses with both his career choices and acting chops, is the above-the-title star, but this is a true ensemble piece, and to Radcliffe’s credit, he’s just an integral part of a very accomplished whole.

Set in 1934 on the island of Inishmaan where, nearby, filmmaker Robert Flaherty is filming his classic “The Man of Aran” documentary, the play focuses on a fictitious group of residents whose lives are affected by the filming.

Radcliffe is the handicapped titular orphaned character, mocked by most of the townsfolk as “Crippled Billy,” and raised by his two adoptive aunts, Eileen (Gillian Hanna) and Kate (Ingrid Craigie), the old biddies who run the local supply store. They are frequently visited by the boastful Johnnypateenmike (Pat Shortt), the town gossip who prides himself on imparting the latest news, whether a neighboring feud, the death of an animal, or a dreadful disease, in return for a few eggs. He’s a caregiver of sorts to his old mother (June Watson) whom he plies with liquor in hopes of bumping her off. She, for her part, lives for the day she’ll see him in his coffin. Gary Lilburn plays the doctor who stubbornly refuses to breach patient confidentiality even under extreme pressure from the voracious Johnnypateen.

Then there are the McCormick siblings: mean-spirited Helen (Sarah Greene) who’s given to breaking eggs on people’s heads and worse, and the sweet-natured but dim-witted Bartley (Conor MacNeill) who has a perennial craving for sweets.

It is Johnnypateen, of course, who informs everyone of the Hollywood crew on the neighboring island of Inishmore, a revelation that prompts Billy to fake a grim doctor’s note indicating that he has only a few months to live, so that boatman Babbybobby (Padraic Delaney) will be persuaded to row him to the filming site, an action which will lead to surprising results.

I won’t say any more about the plot as McDonagh’s twists and turns are part of the ingenious fun, but the dialogue is so flavorsome and his take on the cruelties of human nature are so spot-on that one willingly suspends disbelief for the rest, as one does in the hands of a master dramatist which McDonagh most assuredly is. For all the cruelty of McDonagh’s characters, it’s easy to overlook the very real kindnesses which he shows can co-exist in human nature. Seeing this revival reminds us that McDonagh’s been too long absent from the theater.

The performances are enormously entertaining and authentic, as masterfully directed by Grandage. It feels akin to seeing O’Casey or Synge done by the Abbey or the Gate. The Michael Grandage Company (formed only in 2012), is clearly off to an auspicious start with productions such as this.