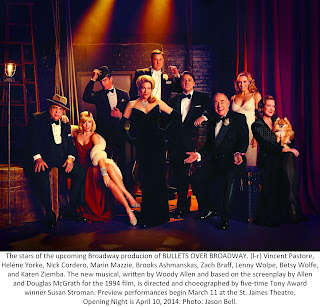 Woody Allen’s 1994 comedy about gangsters bankrolling a Broadway show seemed a natural for musicalization, and so it happily proves to be. Allen has smoothly adapted the screenplay he co-wrote with Douglas McGrath (author, by the way, of the above average book for “Beautiful,” the Carole King musical).

Add to that solid foundation, top-drawer work from director-choreographer Susan Stroman and a perfectly chosen cast, and the result is one of the most pleasurable musicals in town.

With a mostly unhackneyed selection of period songs – though the more familiar ones do sound rather shoe-horned into the plot – which come up fresh in Doug Besterman’s orchestrations, and Glen Kelly’s additional lyrics (when needed), the show is also an aural delight. (It would be more so if Peter Hylenski’s sound design weren’t pitched quite so loud which slightly cheapens even an intentionally brassy show like this, but that’s my only carp, and a minor one.)

Though the cast is strong across the board, I must say straightaway that Marin Mazzie surpasses all her previous work with her hilarious, over-the-top portrayal of self-centered (and alcoholic) star Helen Sinclair. She makes every line count, and nails her three big numbers: “They Go Wild, Simply Wild, Over Me,” “There’s a Broken Heart for Every Light on Broadway,” and best of all, a sexy version of the Bessie Smith ditty, “I Ain’t Gonna Play No Second Fiddle.”

Though intentionally grating, as Rachel York was in the similar role of “Victor/Victoria,” Helene York’s gangster moll Olive is quite a dynamo and bumps and grinds to a fare thee well in the raunchy, double entendre “The Hot Dog Song.” And Betsy Wolfe as the hero’s sweet girlfriend Ellen delivers two winners “Blues My Naughty Sweetie Gives to Me” and later, the show-stopping “I’ve Found a New Baby.” The great Karen Ziemba is rather underused here, but she’s a bright presence as always, and gets to do the breezy second act opener, “There’s a New Day Comin’!”

Stroman creates many memorable stage pictures throughout the evening, and has the most fun with the seven luscious Vargas-like chorus girls who appear in various guises throughout the evening. The men have their big moment in the gangster number, “Tain’t Nobody’s Biz-Ness If I Do,” led by the terrific Nick Cordero as Olive’s mobster bodyguard. But her dazzling production numbers aside, I admired how deftly Stroman stages even the smaller moments so her actors are always showcased to optimum advantage.

Cordero is but one of a strong male ensemble, led by Zach Braff in the John Cusack role of playwright David Shayne who, in the course, of the evening learns the meaning of compromise and then some. He’s the very watchable center of the story and shines dramatically and musically. Vincent Pastore is just right as gang leader Nick Valenti, and reveals a pleasant singing voice is “Gee Baby, Ain’t I Good to You.” And Brooks Ashmanskas is hilarious as voracious leading man Warner Purcell with a burgeoning belly throughout the evening.

All this plays out on Santo Loquasto’s sleek and classy Art Deco sets, which feature a miraculous revolve and continually amaze.