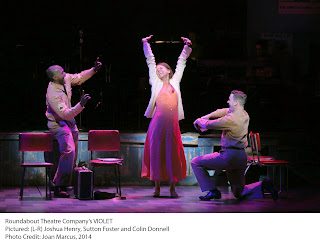 Any memories you might still have of Sutton Foster and Colin Donnell belting out “You’re the Top” and other sophisticated Cole Porter ditties in the recent revival of “Anything Goes” will be pretty much vanquished after you’ve seen them in their present roles as a scrappy, facially disfigured young North Carolina woman and a Vietnam-era soldier who meet on a Greyhound bus as she makes her way to Oklahoma.

And their costars, Joshua Henry and Alexander Gemignani, formerly one of “The Scottsboro Boys” and Broadway’s last Jean Valjean in “Les Miserables” respectively, are similarly transformed by their parts here.

Who says only the Brits have the ability to transform themselves so completely in different roles?

Composer Jeanine Tesori and book writer/lyricist Brian Crawley’s 1997 Off-Broadway “Violet” was revived as part of Encores’ summer season last year, and that re-airing was apparently deemed worthy of a Broadway transfer. And indeed it is, so it was good of the Roundabout to oblige. (The original production was a presentation of Playwrights Horizons.)

The musical – based on Doris Betts’ short story, “The Ugliest Pilgrim,” which became an Oscar-winning short film in 1981 – charts its heroine’s journey from Spruce Pine, North Carolina to Tulsa, to find the TV evangelist whom she thinks will miraculously erase the gash she received in a terrible childhood accident, and make her beautiful.

Along the way, she encounters two soldier buddies, Flick (Henry) and Monty (Donnell) who, after a game of poker at a roadside rest stop, take her under wing. Despite her disfigurement (only suggested, not actually seen, by the way), both men seem attracted to her, and a non-violent triangular situation ensues.

Though the men are skeptical of her stated mission, her determination to find the preacher remains undimmed. I shan’t spoil whether she eventually gets her wish, but by the play’s end, she does go through an emotional transformation.

Tesori’s score – with its roots in country/western and gospel – is beautifully constructed, with several bona fide showstoppers along the way. Henry’s uplifting “Let It Sing” is chief among them, and deservedly earns a huge hand. And in the gospel department, Ben Davis and Rema Webb as, respectively, the preacher and his lead singer. really shake things up with “Raise It Up.”

Gemignani as young Violet’s (Emerson Steele) hard-working, guilt-ridden father is outstanding, and Annie Golden has two entertaining roles: an old lady on the bus, and later, a down-and-out hooker in the Memphis sequence.

But Foster is the extraordinary center of the show, which showcases her extraordinary acting and singing talents, and she electrifies in her climactic confrontation with the preacher.

David Zien’s economical set design with the band on stage is versatile enough to suggest the bus, Violet’s childhood home, the Memphis bar and hotel, and the preacher’s tabernacle, illuminated by Leon Rothenberg’s mood-enhancing lighting.