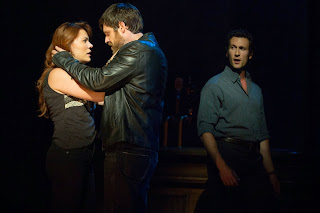 This tale of lifelong shipbuilders in the northeast of England taking control of their shipyard after a lockout and then setting about building the titular vessel as a final testament to their time-honored heritage may seem, on the face of it, to have limited appeal, but in the event, the musical turns out to be quite a solidly absorbing and impressive achievement.

This, thanks to a beautiful, richly varied score by Sting, an intelligent book by John Logan and Brian Yorkey that would sustain interest even without the songs, a fine cast equally adept at delivering both the musical and dramatic values, and highly compelling direction by Joe Mantello.

Gideon (Collin Kelly Sordelet), a young man who’s the latest in a line of shipbuilders in Wallsend, defies his ailing father by abandoning the trade and shipping off to sea. He promises his girlfriend Meg (Dawn Cantwell) that he’ll return to her. But 15 years go by until he returns (now in the person of a superb Michael Esper) after his father’s death, and Meg (now a fiery Rachel Tucker) is involved with Arthur (Aaron Lazar in one of his best roles), a decent man but one who's allied with those closing the shipyard, and she’s the mother of a teenage son Tom (Sordelet) (yes, the son of Gideon, as we find out early on).

When the shipyard faces closure, a newly invigorated Gideon rallies the men, including their leader Jackie (the excellent Jimmy Nail), forms an uneasy bond with his son, and Meg is forced to choose between the Gideon and Arthur.

The local priest Father O’Brien is a powerful force within the story, supporting Gideon and encouraging the workers to persevere, and he’s beautifully played by Fred Applegate in a most endearing albeit familiar characterization. And the church is shown to be a major influence on the community throughout.

But, as noted, the cast is excellent across the board.

The northern England working class setting invites comparisons with “Billy Elliot, “Kinky Boots,” and “The Full Monty” but this one more than holds its own, and in fact, has more gravitas and a less pat ending.

Sting recorded and performed songs from the show on CD and at the Public Theater (the latter taped for a ‘Great Performances” special on PBS), but impressive as the songs were in that setting, they’re even more so heard in their full orchestration. There are choral numbers, love duets, bar songs, all imbued with a Celtic hue, and some that sound very much in a traditional Broadway mold, such as “The Night the Pugilist Learned How to Dance,” a catchy father-son duet. A handful of numbers were pre-existing Sting numbers brought in to augment the score.

Steven Hoggett has provided some not-too-choreographed dancing for the cast, a nicely characterful lot that convincingly embody the rough and ready townspeople.