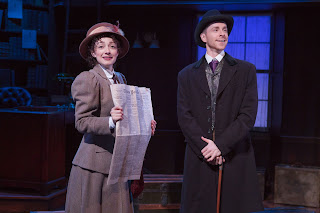 Based on Jean Webster’s 1912 novel, this musical two-hander stars Megan McGinnis as Jerusha Abbott, an orphan with a mysterious benefactor who is not the elderly man she imagines but a privileged younger man who has heretofore cut himself off from emotional connection. Director John Caird’s book honors the epistolary form of its source, and the two protagonists -- Jerusha and her mentor Jervis Pendleton (beautifully played by Adam Halpin) -- speak (or sing) through their letters throughout the evening.

Far from static, the result is highly dramatic thanks to the compelling depiction of Jerusha’s evolution (marvelously acted by McGinnis who is the focal point of all the action), and the ingenuity of Caird’s staging who knows a thing or two about telling a strong narrative as his directing credits include “Nicholas Nickleby” and “Les Miserables.”

Paul Gordon’s music and lyrics tell the story in the same astute way as his 2001 “Jane Eyre”; he has a real knack for this sort of material. Though not period sounding -- ideally, the melodies ought to have the lilt of, say, Ivan Caryll or early Jerome Kern -- and yet, they somehow don’t sound at odds with the material. Apart from the Fred Astaire-Leslie Caron musical film (which, for all its charms, bore scant resemblance to its source), there was “Love from Judy,” a 1952 British musical with music by Hugh Martin which, based on the cast recordings of the time, sounds bland and exceedingly dull. This version has far more integrity.

Caird’s meticulous care in honoring Webster’s themes -- as he puts it in a program note “the growth of a woman’s spirit and independence” and it being a story of “personal growth and emotional evolution” -- doesn’t get in the way of it being a wonderful love story with much the same texture and ultimate audience payoff as “She Loves Me.” Both share the device of correspondents who are clueless that the soulmates to whom they are writing are people they already know.

I can’t praise McGinnis and Halpin (Mr. & Mrs. in real life) too much -- they carry a tremendous load at every performance -- and though I caught up with the show well into the run, they seemed as fresh as if the show has only just opened.

This is a charming, romantic, and underneath it all, serious-minded, show well worth catching.