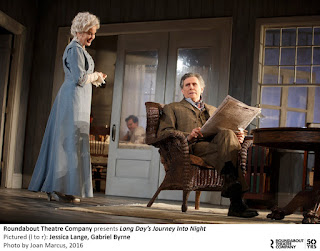 Jessica Lange is at the top of her considerable game as the drug-addicted Mary Tyrone in Jonathan Kent’s powerful revival of Eugene O’Neill’s towering posthumous semi-autobiographical masterpiece. It’s the sort of performance that set me pondering parallels to Laurette Taylor’s legendary performance in “The Glass Menagerie,” one often cited by those who saw it as the best they had ever seen. As it is, I do feel Lange’s performance ranks in my personal Top Five.

The play is over three and a half hours long, and she is onstage for nearly all of it, not making a false move as she transitions from loving mother and wife to needful addict resentful of her family’s suspicions and oh-so-piteously lonely in the shabby summer house (evocatively designed by Tom Pye) that her penny-pinching husband has provided for them, one she has never felt to be truly a home. Lange makes one feel her desperate plight as never before, and from a technical point of view, her acting is quite remarkable. Her line readings always seem so right, and there’s an innate musicality in her accomplished delivery.

She is not acting in a vacuum either. Gabriel Byrne as husband James Tyrone, a once promising actor who has long abandoned his artistic aspirations for a popular role with which he endlessly tours the country, plays him as less hamily theatrical than some, and conveys his deep love of Mary, despite her flaws, most beautifully. His Irish heritage gives the role a wonderful authenticity.

As sons Edmund (the Eugene O’Neill prototype) and wastrel Jamie, John Gallagher, Jr. and Michael Shannon are very fine, and do superlative work with their last act set-pieces. Colby Minifie has a good turn as the maid Cathleen who shares a lengthy scene with Mary.

One marvels again at what a terrific play this is, and how expertly O’Neill captures the rhythms of how people really talk: argumentative and hurtful one moment, conciliatory and loving the next.

If you think you’re not up to sitting through yet another production of this particular play, I’d urge you to think again. In spite of its length, the play never ceases to hold your rapt attention, thanks to Kent’s well modulated helming and, in fact, flies by far faster than the 55 minutes of this season’s unfortunate revival of O’Neill’s “Hughie”!