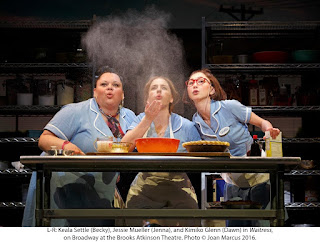 The versatile Jessie Mueller, leaving her Carole King persona completely aside, proves again what a savvy musical theater performer she is with her warm, human portrayal of a roadside diner waitress in this likable adaptation of the late Adrienne Shelly’s 2007 film of the same title.

With a country-flavored score by Sara Bareilles and book (which, I’m told, is faithful to the film) by Jessie Nelson, the story concerns Jenna (Mueller), an abused wife with a talent for making scrumptious pies. She's married to the scarily dominating Earl (Nick Cordero), and she falls in love with her married gynecologist (Drew Gehling). At work she’s supported by her waitress girlfriends, the gutsy Becky (Keala Settle) and the meek Dawn (Kimoko Glenn). They work under the watchful eye of the gruff Cal (Eric Anderson).

The cast is solid across the board. But apart from Mueller, the standout cast member is Christopher Fitzgerald as Dawn’s eccentric boyfriend Ogie who stops the show with his loopy “Never Ever Getting Rid of Me.”

There’s very good work, too, from Dakin Matthews as an irascible customer who ultimately proves not so unlikable as we think at first. And Charity Angel Dawson as Dr. Pomatter’s sardonic nurse demonstrates great comic delivery.

I never saw the film, but there is something a little off-putting from a dramaturgical standpoint. The adulterous affair between Jenna and the doctor doesn't quite set easily though Jenna's motivation is certainly understandable, and there’s a similar subplot with like issues.

One other carp: the lyrics weren’t always intelligible, as when Mueller puts over the eleven o’clock number, “She Used to Be Mine,” which she delivers with considerable passion (not sure if that was the fault of her Southern accent or Jonathan Deans’ sound design).

The show premiered at director Diane Paulus’ American Repertory Theater at Harvard last August. Commendably and logically, given the storyline and the film's origins, the top tier of the creative team are all women.