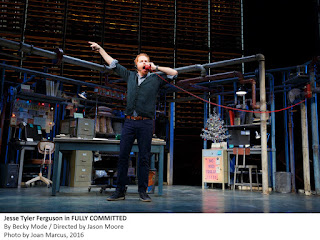 Jesse Tyler Ferguson is extremely impressive as a beleaguered basement switchboard operator at a trendy restaurant. He plays the parts of all the callers, male and female, shifting effortlessly from entitled VIPs (or presumptive VIPs), all of whom are expecting not only reservations but, of course, the best tables, to the restaurant staff upstairs, including the demanding chef, and myriad characters from his personal life, including (most poignantly) his widowed father who’d like him to come home for Christmas.

We’re told that for this production, playwright Becky Mode has “updated the play to reflect today’s foodie and restaurant culture,” and certainly the names have needed to be revised from the original 1999 Vineyard production. Thus we now have Gwyneth Paltrow’s office making all sorts of pesky requests, along with more garden variety calls such as the senior citizen complaining that an AARP discount wasn’t honored on a recent visit (and whining that the food wasn’t hot enough).

Unfortunately, the play – first done with Mark Setlock (credited with creating some of the characters) -- quickly becomes a mite tedious, for all of Ferguson’s charm and appeal. One admires his craft, and the sheer technical feat of sustaining such a frenetic pace for so long, and one can smile at the some of the play’s conceits, but I found laugh-out-loud moments surprisingly few. And for all of Ferguson’s virtuoso skill, in truth it was sometimes tricky to sort out the characters; a few of them sounded too much alike.

Derek McLane has designed an eye-catching and colorful, pipe encased basement (lighted by Ben Stanton), though I’m told the Vineyard (then Cherry Lane) original had a more suitably claustrophobic feel. Maybe a Broadway house, even one as intimate as the Lyceum, is just too big.