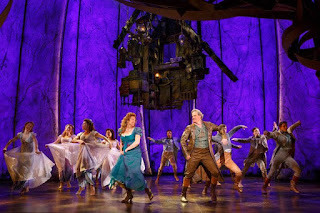 Generally appealing performances and solid production values highlight this pleasantly oddball musical based on Natalie Babbitt’s beloved young adult novel about 11-year-old girl Winnie (Sarah Charles Lewis), who encounters an immortal family in the woods, bonds with one of the sons, while a villainous character known as the Man in the Yellow Suit (Terrence Mann) tries to purloin the magic waters that gave the family its eternal youth.

I’ve not read the novel, which I gather had less sentimentality and more gravitas, nor seen either of its two film versions, so I cannot say how closely Claudia Shear and Tim Federle’s script sticks to the source, but the narrative at hand, set in the 19th century, is reasonably well told. At least in this musical form, there are thematic echoes of “Brigadoon” and “Peter Pan.”

Casey Nicholaw, who usually traffics in edgier material (“The Book of Mormon,” “Something Rotten,” even “Aladdin”), shifts gears for this rather homespun and certainly fanciful tale, and provides some nice balletic and period choreography particularly a number at the local fair where Walt Spangler’s scenic design and Gregg Barnes’ costumes are at their splashiest.

Chris Miller’s folkish music and Nathan Tysen’s lyrics are decent, if sometimes derivative of other shows. Winnie’s musical vocabulary, for instance, seems heavily influenced by Little Red Riding Hood in “Into the Woods,” but she is most engagingly played by Lewis who is, like her character, 11.

Carolee Carmello as the Tuck family matriarch makes the strongest impression, but the cast is quite appealing across the board, including Michael Park as husband Angus, Robert Lenzi as brooding son Miles, and Andrew Keenan-Bolger as mischievous Jesse who falls in love with Winnie. Mann makes a convincing villain. And Valerie Wright and Pippa Pearthree are sweet as Winnie’s mother and maiden aunt.

The ever-reliable Fred Applegate plays Constable Joe, who is set on the case of finding missing Winnie when she goes missing in the woods. And he and Michael Wartella, who plays his sidekick Hugo, share a jaunty vaudeville-style number.

Nicholaw has devised a lengthy circle of life ballet near the end with echoes of Agnes DeMille’s classic story ballets, though you see pretty quickly where it’s going, so it seems to overstay its welcome.

The mortality theme and the conclusion that leading a good life being better than forever forever are not too tragic or heavy-handed for those seeking family-friendly entertainment.

The music supervision of Rob Berman and music director Mary-Mitchell Campbell is as well crafted as the show’s the other elements.

Photo by Joan Marcus Print this post
Posted by Harry Forbes at 4:15 PM