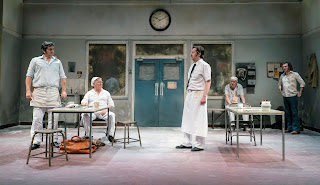 My heart sank when the usher handed me a two-page glossary along with the program as I took my seat.

And indeed, once the play begins, the terms on that sheet – “table man,” “spare wank,” “flier” not to mention some pretty rough language (f-bombs and more)-- come fast and furious. Coupled with sometimes impenetrable regional accents, it seemed Richard Bean’s 1999 play about workers in a 1970s bread factory in Hull (where indeed a young Bean had once toiled) would be a heavy slog indeed. (The play was first done at London’s Royal Court.)

But before long, the ear adjusts to those accents and the strange words. And though the play is demanding and, shall we say, leisurely paced, there were no walkouts during the interval.

That’s due in large part to the fine ensemble cast of seven (Will Barton, Simon Greenall, Matthew Kelly, Kieran Knowles, Steve Nicolson, Matt Sutton, and John Wark), each of whom totally inhabits his character, so we begin to feel a good sense of empathy, and become much more invested in them as the play progresses. And the casual day-to-day banter of the canteen in which the action is set becomes far more interesting with the appearance of a peculiar local student who, it appears, may not be what he first appears; there is even a suggestion of the supernatural.

But mainly, this is a portrait of men who are desperately concerned about holding on to their dreary jobs, no matter how soul-deadening they are. So here they are working on a Sunday, when suddenly they get an unexpected order for 3000 more loaves of bread. Then a technical breakdown in the second act – the jamming of the oven – threatens to put all of them out of work. (At this point, the tension in the play significantly escalates.)

Director Eleanor Rhode creates a totally naturalistic atmosphere, and dramatizes the camaraderie of the men quite superbly.

It’s almost unfair to single out any of the cast, as they are such a fine, tightly knit ensemble, but Kelly is quite amazing as the oldest of the workers (nickname “Nellie”) whose years of toil have made him almost a walking zombie. But taciturn as his character is, you find yourself riveted to his presence.

Still, be warned, “Toast” is a far cry from the side-splitting antics of Bean’s wonderful Goldoni adaptation, “One Man, Two Guvnors” which put James Corden on the map when he did it on Broadway in 2012. There is humor here, yes, but of a more understated kind.

James Turner’s canteen set – where the workers gather for a smoke or a sandwich -- tells you everything you need to know about the bleakness of their jobs. Mike Robertson’s harsh lighting – dimming ominously twice at key points -- is right on target. And Max Pappenheim’s sound design – the thudding and constant undercurrent of the oven -- never lets us forget where we are.