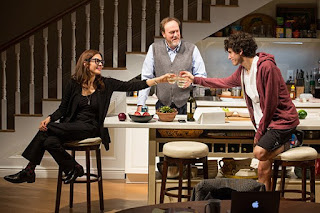 
Playwright Joshua Harmon puts diversity quotas and white privilege through the ringer in this thought-provoking play which takes place at a posh New Hampshire prep school.


Sherri (a commanding Jessica Hecht) is the admissions offer there, working tirelessly to raise the percentage of non-white students, a fact we learn as she berates her downtrodden development assistant Roberta (Ann McDonough in a gem of a characterization) about the draft of the latest edition of the school’s catalog, which does not, in Sherri's opinion, include a satisfactory representation of minority student photographs. (When the play opens the Hillcrest school’s minority rate has risen from six to 18%.)


Sherri later gets a visit from her girlfriend Ginnie (a fine Sally Murphy) -- married to a never-seen black English teacher at the school -- whose biracial son Perry (also not seen) is anxiously waiting to hear whether he’s made Yale. In short order, Perry rings to say that he’s been accepted.


Later, Sherri’s son Charlie (Ben Edelman) -- who happens to be Perry’s best friend -- comes home in a stinging temper. He, too, had applied to the prestigious school, but he has not been accepted, merely deferred. He spews out his rage about the unfairness of his position as a hard-working student who, time and again, seems to lose ground to the minority students, and suggests that Perry made the cut only because of his racial makeup.


Edelman delivers the 10 or 15 minute rant with brilliant conviction, as Sherri and her husband Bill (Andrew Garman), the school’s headmaster, listen in stunned silence. But when Charlie concludes his tirade including the definition of a person of color (why, he challenges at one point, is Penelope Cruz defined as such, and Sophia Loren and Marion Cotillard are not?), Bill coldly chastises him as a privileged white kid and argues the contrary.


Therein lies the play’s argument which plays out over the play’s intermission-less running time. You may find yourself flip-flopping over both sides of the argument, especially when the narrative takes a surprising turn, and Sherri and Ben’s liberal beliefs are put to the test as their own interests are threatened.


Harmon is a superb writer, and he’s got a natural way with dialogue, as demonstrated in his last Broadway play, “Significant Other.” Though ostensibly a dramatic issue play, there’s plenty of humor here, too, and the debates are sure to generate plenty to think about and lots of post-show discussion.


Daniel Aukin, who directed Harmon’s “Bad Jews,” clearly has an affinity for Harmon’s style, and perfectly orchestrates the shifting perspectives of “Admissions” (a punning title, by the way, as you come to realize). Riccardo Hernandez’s set -- lighted by Mark Barton -- serves seamlessly as both the Mason home and Sherri’s office. Toni-Leslie James’ costumes fit the academic milieu neatly.