The Low Road (The Public Theater) 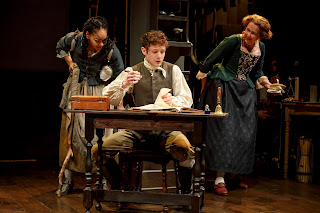 
This very entertaining satirical allegory from Bruce Norris (“Clybourne Park”) offers a succession of sharp barbs about the origins of  free market economy, self-interest, and greed set in 18th century Colonial America, as an unscrupulous young man, born out of wedlock, attempts to scheme his way to a fortune.


Adam (“The Wealth of Nations”) Smith, in the ingratiating person of Daniel Davis, narrates the action which underscores the financial parallels between then and now. In the course of the evening, there are sly references to such phenomenon as collective bargaining, airline travel pricing, charter schools and the like.


Told in the form of a picaresque tale (think “Tom Jones” or “Candide” with a bit of “The Beggar’s Opera” thrown in for good measure), we learn how young Jim (Chris Perfetti) was brought as a baby to the doorstep of innkeeper/brothel madam Mrs. Trewitt (Harriet Harris). Her feisty servant Old Tizzy (Crystal A. Dickinson) predicts the boy will grow up trouble, and takes his birthmark (a copy penny on his backside) as a bad omen; whereas Mrs. Trewitt imagines this means he’ll be a wealthy gentleman. The baby had come from a note signed “G. Washington,” and the ladies assume it’s none other than George, and the message, in fact, promises great recompense for them when the lad turns 17. By that time, Jim has, on his own, become scarily proficient at finance investing the whores’ money in shady bonds.


When he sets off for Virginia to make his way in the world, he purchases a slave John Blanke (Chukwudi Iwuji) who turns out not to be the compliant beast of burden the bullying Jim expects but a well educated heir to a fortune himself. Their subsequent adventures include meeting a kindly blind cult leader (Max Baker) and his daughter (Susannah Perkins) and later, in New York, he’s taken under wing by the wealthy paternal Isaac Low (Kevin Chamberlin), his dithering wife (Harris again), and giddy daughter (Tessa Albertson).


Norris’ points about finance are as pointed as those of Ayad Akhtar in "Junk,” and just as engrossing. Wittily directed by Michael Greif, the piece is consistently absorbing, despite its lengthy running time of about two and a half hours.


David Korins created the very versatile set designs which range from Mrs. Trevitt’s brothel to a British blockade to a fashionable New York apartment, with an amusing (and surprising) detour to the present day in the second act.


Emily Rebholz’s costumes are period perfect with impeccable lighting and sound design by  Ben Stanton and Matt Tierneyk’s respectively. J. Jared Janas and Dave Bova’s wig, hair and makeup designs are all key to keeping up the atmospheric period flavor.


Crystal A. Dickinson, Chris Perfetti, and Harriet Harris in the American premiere of The Low Road, written by Bruce Norris and directed by Michael Greif, running at The Public Theater. Photo credit: Joan Marcus.
Print this post
Posted by Harry Forbes at 10:19 AM