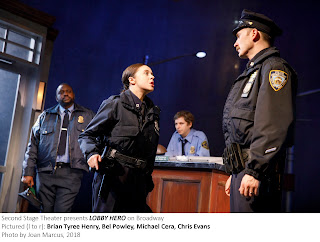 
Second Stage opens its Broadway venue with an exceedingly fine revival of Kenneth Lonergan’s 2001 play about a building security man faced with a moral dilemma when his supervisor confides he may be tempted to commit perjury to save a brother who’s been arrested for a heinous crime.


Michael Cera is just brilliant as the guileless titular chatterbox Jeff, but the cast of four is altogether splendid including Brian Tyree Henry as the basically decent but ethically wavering boss William, Bel Powley (a Brit with a flawless New York accent) as a feisty rookie cop struggling during her probation period, and Chris Evans, Marvel movie action star making an outstanding Broadway debut as a sleazy cop, a tricky role masterfully performed.


Lonergan compassionately etches these characters showing them as not entirely good nor bad but invariably making wrong-headed decisions at crucial moments. The laughs are plentiful, but there’s a lot of thought-provoking material here.


Director Trip Cullman is perfectly attuned to the playwright’s intentions and delicately orchestrates the action with its ever-shifting moral focus.


In the mad flurry of end-of-season openings, “Lobby Hero” stands tall with the best of them.


One caveat, however: the renovated Hayes Theater is mostly lovely, but leg room is practically non-existent. A revamp of the seats needs to be a top priority.