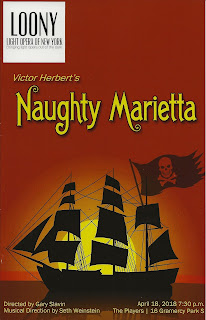 
This most famous of Victor Herbert’s operettas, and arguably his best, received a classy salon concert performance the other night in the acoustically warm Dining Room of The Players club.


Shifting format from the last two years, when LOONY’s annual spring operettas were offered in staged productions but with no orchestra (though, in each case, one was subsequently used on the ensuing CD recordings), “Marietta” had eight instrumentalists, in addition to Music Director Seth Weinstein on the piano leading a buoyant, stylish performance. 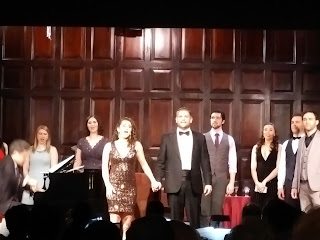 On this occasion, there were no costumes or set to suggest the 1750 New Orleans setting, unlike LOONY’s last production of the work in 2010 which used Alyce Mott’s performing edition. On this occasion, the “libretto reduction” was credited to John Ostendorf, and offered just enough of the plot to buttress the songs, approximately 14 in all.


With eight principals and an ensemble of three, the large concerted numbers were mostly skipped, though the strong-voiced cast managed a reasonably big sound for the great “Live for Today” number and the finales.


As this was basically a concert reading, casting didn’t need to be a perfect visual fit had this been a full production. The affable and boyish Adam von Almen, for instance, was hardly the villainous rake harboring a secret identity as the notorious pirate Bras Piqué. Nor was the youthfully handsome Adam Cannedy a match for Etienne’s doddering elderly father, Lieutenant Governor Grandet. But very much on the positive side, von Almen sang his big number, “You Marry a Marionette” splendidly and with style, as did Cannedy with his wonderful, virile account of “Sweet By and By.” 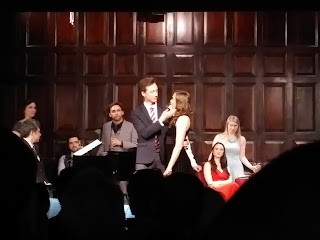 On the other hand, Rachel Policar (fondly remembered in the name part of the National Yiddish Theatre Folksbiene’s “The Golden Bride” in 2015), was finely matched with her titular role, the Italian countess in disguise as a poor casquette girl. Strong voiced and fluent, she nailed her part from her opening number teasingly describing the “good” and “ naughty” sides of her personality, and delivered the famous “Italian Street Song” with all the requisite flair and vocal acrobatics.


Bearded tenor Stephen Steffans in his heroic role of Captain Richard Warrington coped well with the high-lying “I’m Falling in Love with Someone” and his half of Marietta’s dream melody “Ah, Sweet Mystery of Life.” His familiar  “Tramp! Tramp! Tramp!” was staged by director Gary Slavin slightly tongue-in-cheek, and there was some tiresome repeated business in the script about him being “Captain Dick.” Similarly, the script had Warrington stumble repeatedly over “Bras Piqué.” 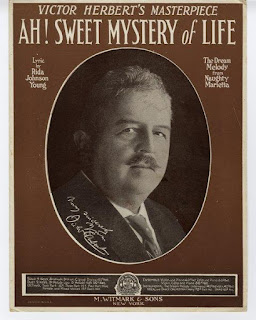 Bryan Elsesser as Dick’s comic servant Simon (originally a Yiddish stereotype), was more mannishly cocky than boyishly boastful, but like von Almen and Cannedy delivered his two numbers “It’s Pretty Soft for Simon” and “If I Were Anyone Else But Me” solidly.


Jessica Kimple eschewed any sort of exoticism as Etienne’s Quadroon slave/mistress Adah but she earned a well-deserved hand for her sensitive “‘Neath the Southern Moon.” LOONY regular Natalie Ballenger was luxury casting for the smallish role of casquette girl Lizette.


Though it’s always a pleasure to hear this evergreen score, especially when it’s performed as well as this, one hopes that next year LOONY gets back on the more adventurous course of the last four years, productions that spawned treasurable recordings: Offenbach’s “I’le de Tulipatan” (in English translation), Jerome Kern’s “Sally,” and Victor Herbert’s “The Only Girl” and “Orange Blossoms” on the Albany label.


Albany already has Ohio Light Opera’s excellent recording in its catalogue, and buffs may want to check out Comic Opera Guild’s super-complete performance, including some cut numbers, though accompanied by two pianos.


(The Players, 16 Gramercy Park South; April 18 only); ovationtix.com or http://www.lightoperaofnewyork.org/)


Photos: Leslie Middlebrook Moore
Print this post
Posted by Harry Forbes at 7:14 AM