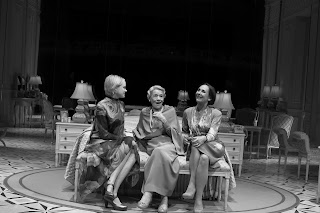 
Joe Mantello’s revival of Edward Albee’s 1994 Pulitzer Prize-winner is impeccable in every respect, but the big news here is the great Glenda Jackson’s return to Broadway after a hiatus from acting of 30 years for most of which she served as a member of Parliament. We had heard of her triumph as “King Lear” two years ago in London  -- yes, as King Lear -- but I was still not prepared for the great authority and pitch perfect assumption of her role here.


This is very much the same Jackson we remember from the Ken Russell films, “Elizabeth R,” and her last Broadway appearance in “Macbeth” in 1988, her powers undiminished.


Albee’s play concerns an ailing cantankerous matriarch (identified only a “A”). She’s attended by a weary and sardonic caretaker (Laurie Metcalf), and an emissary from her lawyer (Alison Pill). At the end of the first act (though it is played without intermission), A suffers a stroke, and for the remainder of the play, the caretaker takes on the role of A’s 52-year-old self known as B, and the legal aide A’s 26-year-old self called C.


Early on, we hear that from the age of 16 onwards, it’s all downhill for all of us (big laugh), and the play would seem to bear out that premise.


B and C each wonder what brought them from one age to the next. Along the way we learn of an ailing husband, an alcoholic sister, an adulterous affair with a groom, and a gay son who rarely visits.


Miriam Buether has designed a sumptuous pastel bedroom, and the three ladies are smartly outfitted in Ann Roth’s elegant wardrobe. (Jackson looks particularly lovely in her lilac robe and marcelled hairdo.) Paul Gallo has lighted the stage with a warm glow. Buether has concocted a magical effect for the second half of the play and there’s a marvelous mirror effect towards the end.


All three ladies are quite wonderful and form a well-knit ensemble. Metcalf’s wry line readings land laughs each time. And Pill, in the least overtly showy role, grows more commanding as the part allows in the second act. But Jackson -- cranky, humorous, or imperious --  is simply tremendous.