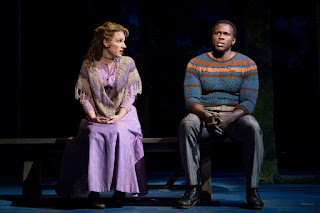 
Anyone walking into the latest revival of Richard Rodgers and Oscar Hammerstein II’s 1945 masterpiece might have good reason to fear that an authentic “Carousel” would be buried under an overlay of superfluous revisions and “improvements,” for so certain wags have been reporting during the preview period.


But happily, that’s mostly not so. Though some conceptual touches require a mental adjustment, and there are some cuts to the script and the score, veteran director Jack O’Brien’s production is still, at heart, the cherished work we know and love. The most radical element about the production is probably the bold casting of a black Billy Bigelow in the very talented person of Joshua Henry (“The Scottsboro Boys,” “Violet”). which, if not historically accurate for the turn of the last century Maine, works plausibly in underscoring Billy’s isolation.


And once Henry and Jessie Mueller’s sensitive, beautifully sung Julie Jordan work their magic with the rapturous “If I Loved You,” you feel “Carousel” is in good hands. Later, Henry delivers as powerful a “Soliloquy” as you’ve ever heard, and the audience goes rightly wild. He has another stirring moment in the second act with “The Highest Judge of All.”


Billy is really a brutish character, however, redeemed only by his love for Julie, and Henry plays that aspect uncompromisingly, so much so that the romance with Julie is somewhat diminished. But then, apart from the great duet, and the temporary softening of his character when he learns Julie is going to have a baby, their substantive moments together are few.


As the comic secondary couple Carrie and Enoch Snow, Lindsay Mendez and Alexander Gemignani match Mueller and Henry in the vocal department and Mendez nails the comic aspects of the part delightfully. 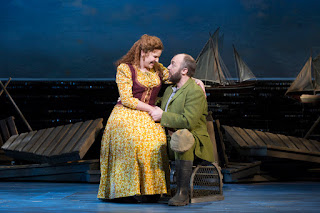 Opera star Renée Fleming, as Julie’s cousin, Nettie Fowler (often cast with a mezzo), takes to her first Broadway musical with ease, exuding warmth, and blending collegially into the ensemble. She leads a lustrous “June Is Bustin’ Out All Over” and later earns a huge ovation for “You’ll Never Walk Alone.” 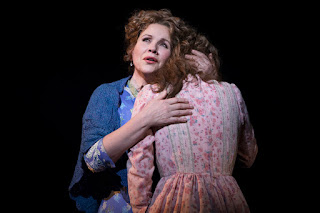 That fine dramatic actress Margaret Colin does well with the non-singing role of the battleaxe carousel proprietor Mrs. Mullin. There’s additional luxury casting in the great John Douglas Thompson as the Starkeeper, though his frequent appearances during the early scenes as he silently observes Billy’s activities are a bit distracting, and no doubt confusing to anyone seeing the show for the first time.


As for the ne’er-do-well Jigger, New York City Ballet principal dancer Amar Ramasar does surprisingly well in the acting and singing departments, but somehow a dancing Jigger seems at odds with the sinister character.


The original Agnes de Mille choreography remains definitive, but the new choreography was devised by the estimable Justin Peck, resident choreographer of the New York City Ballet, and his work here is fine on its own terms, particularly an extended dance sequence which follows the vigorous male chorus “Blow High, Blow Low,’ and Billy’s daughter Louise’s ballet in the second act (beautifully danced by Brittany Pollack), the latter echoing de Mille in its narrative essentials. Peck has replaced the pantomime which accompanies the opening “Carousel Waltz” (and which Hammerstein’s script insisted should be “in no sense a ballet treatment”) with a fully danced prelude which I do feel adds rather an artificial ambience from the get-go.


There’s nicely stylized effect in this sequence, however, when set designer Santo Loquasto has the canopy of a carousel descend from the flies, and the dancers below form a human merry-go-round.


Enoch Snow’s pretty paean to domesticity, “Geraniums in the Winder,” which Gemignani would have sung very nicely, and the lively “Stonecutters Cut It On Stone” for Jigger and the female chorus have both been cut, presumably to tighten the narrative, but given the high standing of this beloved R&H score, their omission amounts to sacrilege.


Jonathan Tunick is credited with new orchestrations. How closely they adhere to the Don Walker originals I cannot say, but they sound fine to my musically untrained ears. Those original charts were heard in all their glory in the 2002 Carnegie Hall concert with Hugh Jackman and Audra McDonald and also the 2013 New York Philharmonic staged concert with Nathan Gunn and Kelli O’Hara (with Mueller shining as Carrie on that occasion).


There was much #MeToo sensitivity about the wife beating aspects of Billy’s character, but those elements have been mostly retained, with some modification of Julie’s loving tolerance of same. When towards the end, Billy slaps his daughter’s wrist, the audience gasps, a confirmation of today’s sensibilities.


Of course, Billy -- like Liliom in the Ferenc Molnar play source material -- insists he only slapped Julie once, but there are repeated references to his being rough with women in “Liliom” and the original “Carousel” script. It’s important to remember that in the play, Liliom, unlike Billy, suffers hellfire for the suicide, and his ultimate redemption is not clear as the slap to Louise is considered a failure. But Julie asserts her love for him in the closing line of the play addressed to Louise, one that Hammerstein retained in slightly modified form, but the current production cuts: “It is possible, dear--that someone may beat you and beat you and beat you, and not hurt you at all.”

There were other regrettable cuts in Oscar Hammerstein’s script, notably the card game with Jigger where Billy loses the money he would have gotten from their impending robbery, but the show is still long.


Ann Roth’s costumes, Jules Fisher and Peggy Eisenhauer’s lighting, and Scott Lehrer’s sound are all top-flight. And the music sounds grand as ever under Andy Einhorn’s musical direction.


The revisions preclude this version being anything like a definitive “Carousel” -- the 1965 Lincoln Center revival with original star John Raitt will ever hold that place in my memory -- but the revival stands tall among this season’s musicals.

Print this post
Posted by Harry Forbes at 6:29 AM