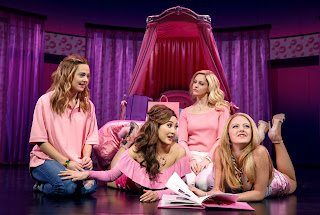 
I approached “Mean Girl,” which has opened on Broadway after a tryout in Washington, D.C., warily expecting yet another standard issue movie-to-stage musical adaptation and, in many respects, it is. And yet, this retread of the popular 2004 film, adapted by Tina Fey from her film script, is chock full of talented performers, inventive staging, lively dancing, and a steady stream of funny bits, so I’m happy to report I had as good a time as the rest of the cheering crowd around me by show’s end.


The narrative closely follows the film. Cady (appealing Erika Henningsen in Lindsay Lohan’s film part) has grown up in Kenya with her biologist parents and has now moved back to the states where she relishes going to a “normal” school and having non-animal friends for once. (There’s a most amusing “Lion King” spoof in the opening scene.)


Instead, at Illinois’ North Shore High, she’s treated like a freak until she’s taken under wing by Damian (a wonderfully loopy Grey Henson) and artsy goth-girl Janis (Barrett Wilbert Weed).  In short order, though, she meets the school bitch Regina (Taylor Louderman) and her devoted acolytes, the hyper-insecure Gretchen (Ashley Park) and pretty-but-dumb Karen (Ashley Park), and they recruit her to join their clique, The Plastics. A math wiz, Cady falls for decent classmate Aaron (Kyle Selig) who, she soon learns, had been Regina’s boyfriend. When Regina learns of this, she steals him back.


Cady decides to adopt Regina’s ruthless tactics, and In the process, she loses her values until (spoiler alert) she finds herself again.


Under Casey Nicholaw’s savvy direction and his terrific choreography, the momentum never stops, and the whole show is imbued with a bracing energy.


Fey has adhered closely to the film script, sensibly updating where necessary to include references to social media and smartphones.


The songs by Jeff Raymond (music) and Nell Benjamin (lyrics) run the gamut from traditional Broadway to contemporary pop and rap, and on first hearing, they seem definitely a cut above the generic tunes we hear so often, and the lyrics have a good deal of wit. Park’s plaintive “What’s Wrong With Me?” and Henson’s big tap number “Stop,” which opens the second act are standouts.


Exceptionally well cast, the show is brimming with talent in the triple-threat way we sometimes take for granted among today’s musical theater talent pool. Kerry Butler, who once upon a time might have played one of the girls, expertly plays three roles: Cady and Regina’s mother, and math teach Ms. Norbury (Fey’s role in the movie) whom the girls slander.


This is popular entertainment in the best sense.

Print this post
Posted by Harry Forbes at 8:06 AM