A Brief History of Women (Brits Off Broadway) 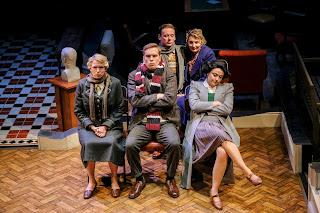 A Brief History of Women (Brits Off Broadway)


It’s always a pleasure to be able to see these imports from Alan Ayckbourn’s Stephen Joseph Theatre in Scarborough, England. And the latest -- presented, as always, courtesy of 59E59’s  enterprising Brits Off Broadway lineup -- is no exception, though I’ll admit “A Brief History of Women” required some warming up on my part.


The play is constructed in four separate scenes from the 1920s to the 1980s, connected by location (Kirkbridge Manor) and its principal male character Spates beautifully played with Everyman decency by Antony Eden. But the tone varies a bit disconcertingly from scene to scene. There’s more than a slightly unpleasant edge to the first, the second is unrealistically farcical, the third returns to the more expected Acykbourn brand of humor, and the fourth combines more of that humor with a satisfyingly touching wrap-up.


As always, much of the pleasure derives from watching Ayckbourn’s versatile troupe morph from one character to another. Wigs and Kevin Jenkins’ costumes do their excellent part, but the cast is amazingly adept at transforming themselves from the inside out.


In Part 1, it’s 1925, and it’s the engagement party of the daughter (Laura Matthews) of Lady Caroline Kirkbridge (Frances Marshall) to Captain Fergus Ffluke (Laurence Pears). While Caroline and Fergus’ mother (Louise Shuttleworth) chat in the ballroom, the former’s misanthropic and brutish husband (Russell Dixon) is lecturing Fergus on how women must be kept in their place. Caroline finds herself attracted to Spates (Eden), at this point a 17-year-old footman. There’s a “Downton Abbey”-like thematic feel to this section, as the old ways are rapidly giving way to the new.


In 1942, the Manor has become a girls’ preparatory school, and Spates is a teacher there having an affair with a young, emotionally unbalanced widow (Matthews), while the headmaster (Dixon) warns Spates to be more discreet. Another embittered teacher (Shuttleworth) takes out her hatred of the Germans against a Swiss teacher (Marshall) she insists must be German, evidence to the contrary. Gym teacher Desmond (Pears) is meanwhile preparing for the Guy Fawkes fireworks that night which you just know will go spectacularly awry, and indeed, they do.


In 1965, the Manor is now an arts center, and the campy director (Dixon) is rehearsing a panto version of “Jack and the Beanstalk” with actress Pat (Marshall) as Jack, and his wife Gillian (Shuttleworth) as the front end of Jack’s cow. The exasperated director must contend with the politically correct pretensions of a sullen young man (Pears) who finds the script demeaning to the lower classes. Spates, for his part, is now the administrator of the place, and becomes more actively involved with the characters as he watches the rehearsals.


And finally in 1985, the Manor has become a hotel, and the semi-retired Spates now its general manager.  A young couple, descendants of the Kirkbridges from the first scene (Matthews and Pears), arrives with the woman’s great-grandmother in tow with poignant results.


Ayckbourn himself directs with obvious authenticity. Jenkin’s set which, like the cast, transforms effortlessly from era to era, and suggests at least five different playing areas at any one time is ingeniously constructed. Kirkbridge Manor thus becomes as much a character as any of the players.


Even if not quite top drawer Ayckbourn, this first-rate production is well worth your time.