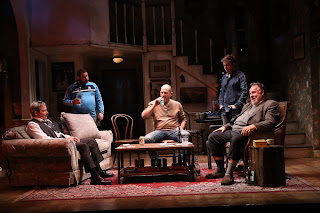 
A decade after its Broadway run, here's a solid revival of the 2007 Conor McPherson play about a Dublin Christmas Eve gathering of ne’er-do-wells and a mysterious stranger (who, slight spoiler though his identity is revealed early) who turns out to be the Devil) in their midst, the latter played by Matthew Broderick in the role created by the considerably more hulking and sinister Ciaran Hinds.


The Irish Rep company is, on the whole, nearly a match for the originals. Colin McPhillamy is especially fabulous as the blind and perpetually inebriated braggart Richard living with his more straight-laced on-the-wagon brother “Sharky” (Andy Murray). Their hard-drinking friends Ivan (Michael Mellamphy), afraid to go home to his wife in his inebriated state and continuallyk searching for his missing glasses, and suave Nicky (Tim Ruddy), who’s dating Sharky’s ex-wife, join for a game of cards that has higher stakes than most of the characters imagine.


Mild-mannered though Broderick’s persona is by nature, he does manage to raise his voice threateningly at times, which is all the more powerful as it’s no unexpected. Ultimately, I'd say he's quite effective in the role.


Irish Rep Producing Director Ciarán O’Reilly, demonstrating again a real affinity for McPherson’s work, directs with a sure hand. And his cast totally inhabit their roles, showing that, a decade later, the play holds up very well indeed.