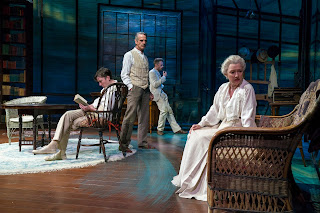 
It’s a pity that this high-powered revival of Eugene O’Neill’s most autobiographical play (first seen in 2016 at the Bristol Old Vic), should come to us so soon after New York had the superlative Roundabout Jonathan Kent production with Jessica Lange giving such an indelible performance, and backed by a fine cast to boot.


Here we have Jeremy Irons and Lesley Manville both, of course, very fine artists and giving predictably polished, intelligent performances, and Sir Richard Eyre at the helm, so it can hardly be said to be without merit. But frankly, the Kent production was far more successful all around.


Though attractively set and costumed by Rob Howell in a abstract rendering of the Tyrones’ summer home with a forced perspective skylight, and moodily lighted by Peter Mumford with atmospheric sound design (foghorns and the like) from John Leonard, I could rarely believe these people were a family, though dysfunctional barely begins to describe how the parts are written: loving and considerate one moment, seriously hateful and hurting the next.


The great Manville, so delectably self-contained in “Phantom Thread,” comes on like gangbusters here as the morphine-addicted Mary Tyrone, chattering away a mile a minute. Though she’s too fine an artist not to ultimately give the part shading, I thought her performance overall rather one note. As the skinflint family patriarch (too cheap to engage first-rate doctors for his wife and consumptive son), and embittered after a lifetime of eschewing Shakespeare to play a part in a popular melodrama (in actuality, “The Count of Monte Cristo”), Irons still registers as a debonair Englishman, no matter how shabbily outfitted. Which is not to say that, like Manville, he doesn’t have many striking individual moments.


The sons are played passably, but not as distinctively as in past productions with the likes of Philip Seymour Hoffman, Michael Shannon, or of course, Jason Robards, Jr. in the Lumet film. As the O’Neill prototype, the consumptive Edmund, Matthew Beard perhaps overdoes the sensitivity but he’s reasonably affecting. As his elder brother Jamie, dissolute actor and alcoholic, who both loves and envies his kid brother, Rory Keenan’s bitterness has something of a superficial quality. Both brothers revelatory speeches near the end lack the requisite punch.


I very much liked Jessica Regan as the family maid who shares an intimate (and mercifully lighthearted) moment with Mary Tyrone when the family is out.


Though the play begins annoyingly with a rapid flurry of naturalistic overlapping dialogue, and Manville, in particular, reads her lines so quickly throughout, the evening still manages to feel rather long. I’d like to think I was just weary from having sat through O’Neill’s “The Iceman Cometh” (also three and a half hours long) a few nights earlier, but I do think it’s the pacing.


Flaws notwithstanding, the marquee names of Irons, Manville, and Eyre will be of interest to committed theatergoers.


At the end of its Brooklyn run, the production will play Los Angeles’ Wallis Annenberg Center for the Performing Arts during the month of June.