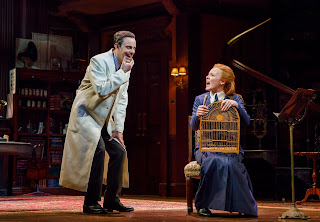 
Director Bartlett Sher set a high bar for himself with his sterling revivals of “South Pacific” and “The King and I,” totally respectful to the works but staging them with a wonderfully fresh and intelligent eye. Would his new revival of Lerner and Loewe’s “My Fair Lady” live up to the same high standards? The answer is a resounding yes.


“My Fair Lady” meets expectations and then some. I would even say, as an English friend opined during intermission, that it’s the best production since the original, and he should know as he was a dresser for the original production at London’s Drury Lane Theatre. As a very small child saw the original Broadway production, albeit at the end of its multi-year run, so I can only barely visualize it. But I’ve seen many fine (and not so fine) revivals since, and reflecting back, this one seems to me the most satisfying of all.


Beautifully designed by Michael Yeargan with magical lighting by Donald Holder and lavishly costumed by Catherine Zuber on the expansive Beaumont stage, with intelligent casting (37 in all) from top to bottom, this is about as good as it gets. The 29-piece orchestra provides a plush orchestral palette, and Marc Salzberg’s sound design is impeccable.


Lauren Ambrose with her red hair and pale skin is not quite how one visualizes Eliza Doolittle, but she’s as fine an Eliza as any I’ve ever seen either in “Pygmalion” or “My Fair Lady.” Wonderfully endearing as the naive Cockney flower girl in the early scenes, touchingly vulnerable, and appropriately authoritative in the later ones, she finds nuances in the dialogue that surprise and delight. And yes, she has a lovely soprano voice, and “I Could Have Danced All Night” soars.


As her irascible, misogynistic vocal coach, Harry Hadden-Paton is also superb, the very model of a Henry Higgins. Singing more actual notes than creator Rex Harrison, but at the same time, comfortably traditional in the best sense, he conveys the growing attraction to Eliza most convincingly, culminating in a moving rendition of “I’ve Grown Accustomed To Her Face.” As his more civilized partner in Eliza’s linguistic betterment, Allan Corduner -- who played Sir Arthur Sullivan in Mike Leigh’s “Topsy Turvy” -- makes a perfect Colonel Pickering.


The amazing Norbert Leo Butz is almost unrecognizable as Eliza’s father, the bewhiskered and greying Doolittle, and delivers his two number with all the music hall brio the part requires. “I’m Getting Married in the Morning” and “Get Me to the Church on Time” are real showstoppers, the latter replete with can-can dancers. Vocal powerhouse Jordan Donica as the lovelorn Freddy sings the show’s hit song “On the Street Where You Live” with requisite fervor and ringing high notes.


Of the big setpieces, the Ascot Gavotte -- nimbly choreographed, as are all the other numbers, by Christopher Gattelli -- is a particular knockout with the entire ensemble spread out across the stage in hilarious snobbish detachment.  Eliza’s coming out at the Embassy Ball is jaw-droppingly staged with an onstage orchestra accompanying the waltzing couples.


At every stage, the line and lyric readings here are just that much fresher without betraying Shaw or book writer Lerner. When Eliza sings of being “absolutely still” in “Wouldn’t It Be Loverly?” she really emphasizes the word “still” as if the thought of doing absolutely nothing was bliss beyond imagining. When she has her big breakthrough in “The Rain in Spain,” her first tries of the line are still effortful, a wonderfully naturalistic touch, but ultimately just as joyous as ever. 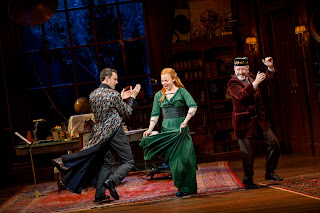 Diana Rigg, herself an acclaimed Eliza in “Pygmalion” opposite the late Alec McGowan’s Higgins in 1974, is a fine Mrs. Higgins, though she doesn’t get to sing. (McGowan did play the musical Higgins in a recording for Jay Records, and he was terrific, and like Hadden-Paton, sang more of the musical line than is customary.)


Much has been made in the pre-publicity interviews about Eliza being molded by Higgins in a way that’s unacceptable in today’s #MeToo environment. But, in fact, Eliza, as Shaw first wrote her, has always given as good as she’s gotten, and despite her momentary faltering after her transformation (“What’s to become of me?”) she finds her own way. Shaw had her leave Higgins at the end of “Pygmalion” with the latter exclaiming with bemusement “She’s going to marry Freddy.”


But director Gabriel Pascal, who worked with Shaw on the movie version of the play, slyly inserted an ending that had her return to Higgins. As far as we know, Shaw accepted the change with equanimity. In this production, Sher rather splits the difference, but I shan’t spoil how. Throughout the show, there’s none of the wholesale cutting of songs or dialogue that detracts from the integrity of the otherwise excellent revival of “Carousel.”


Many believe “My Fair Lady” is the most perfect of musicals and I’m sure Sher’s production will go a long way to reinforcing that view.