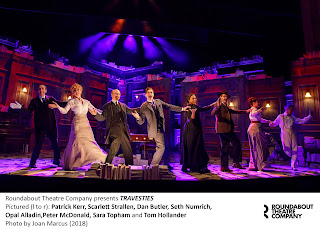 
Delectable performances and superb staging make Tom Stoppard’s dizzying mashup of “The Importance of Being Earnest,” Tristan Tzara (one of the founders of the Dada movement), Lenin, and James Joyce richly entertaining, even if the text itself may send you scurrying for Wikipedia.


The show premiered on Broadway in 1974 as a Royal Shakespeare Company import with John Wood giving a virtuoso performance as Sir Henry Carr, the British consulate officer who narrates the play as an old man, morphing into his younger self as he joins the action. I was totally enthralled, and ran out to buy the script, a pattern repeated with subsequent intellectually challenging Stoppard plays for some time to come.


Here it’s the great Tom Hollander, only his second time on Broadway, as Carr and he’s every bit as entertaining as Wood back in the day.


What inspired Stoppard to construct this madcap comedy -- for such it is underneath all the intellectual content -- was learning that Joyce, Tzara, Lenin, and Carr were all in Zurich in 1917, and that Joyce had indeed mounted a production of “Earnest” with Carr playing Algernon, an experience that ended with acrimony and a lawsuit between the two. Stoppard has his fanciful counterparts give vent to their particular passions, and the nature of art in general.


Besides Hollander’s virtuoso performance, there’s fine work by the entire ensemble including Seth Numrich as Tzara; Peter McDonald as Joyce; Dan Butler as Lenin; Opal Alladin as his wife Nadya; and Patrick Kerr as Carr’s butler. McDonald, like Hollander, hailed from the production mounted by London’s Menier Chocolate Factory, as does the creative team.


Scarlett Strallen and Sara Topham could not be more delightful as, respectively, Gwendolen, aka Joyce’s assistant, and librarian Cecily (for whom Tzara falls), especially in their song modelled on the once famous “Mr. Gallagher and Mr. Sheen” vaudeville number. Though not a full-out musical, the songs in the show are so well done, you might at times think it is. During the interval, Gilbert and Sullivan plays on the speaker system as Carr was a G&S fan.


Patrick Marber, fine playwright himself, directs for maximum enjoyment, and if you don’t understand what’s going on -- though there are helpful program notes and a handy education guide that can be accessed on the Roundabout’s website -- you’ll enjoy it anyway.