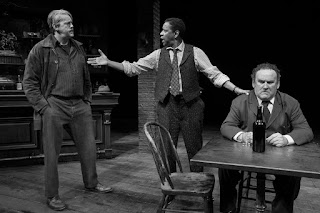 
This latest revival of one of Eugene O’Neill’s several epically long plays -- first produced in 1946 -- ranks high among the half dozen or so I’ve seen, though they’ve all, in their way, been very fine, with distinguished casts headed by the likes of Kevin Spacey and the peerless Jason Robards, Jr. The color blind casting of Denzel Washington in the lead role of traveling salesman Hickey brings to mind James Earl Jones’ excellent assumption of the role in 1973 at Circle in the Square.


The plot concerns a group of depressed losers in a dilapidated Westside bar in 1912, momentarily energized by the annual appearance of a flashy salesman who can always be counted upon to give them a good time. But much to their surprise, the Hickey who shows up now is a reformed man, on the wagon and consumed with evangelistic fervor in determining to rid his old cronies of their unrealistic pipe dreams.


In most particulars, actually, I think the Chicago production had the edge, but this one is certainly high quality too. Besides Washington’s dynamic performance, there are solid turns by Colm Meany as bar owner Harry Hope (who hasn’t left the premises in 20 years); Frank Wood and Dakin Matthews as The Captain and The General respectively, Boer War adversaries reliving their past triumphs; Tammy Blanchard as Cora, a prostitute who hopes to marry day bartender Chuck (Danny Mastrogiorgio); Bill Irwin as ex-circus man Ed; and Michael Potts as former owner of a gambling house (played so memorably by John Douglas Thompson in the Falls production).. I mean no disservice to the rest by not singling out Carolyn Braver, Joe Forbrich, Nina Grollman, Thomas Michael Hammond, Neal Huff, Jack McGee, Clark Middleton, and Reg Rogers.


David Morse is especially powerful as disillusioned anarchist Larry Slade to whom young Don Parritt (Austin Butler), son of a jailed anarchist mother, comes for absolution. Slade was his mother’s ex-lover, and Don, we learn, was responsible for her arrest.


George C. Wolfe directs the long play with as much of an eye towards the humor (and there is much) as the high drama, and elicits great performances from all. Washington’s long revelatory monologue is staged with Hickey in a chair speaking straight out to the audience as the others listen from behind, perhaps the one bit of staging that felt artificial.


Despite the play’s length and repetition -- phrases like “pipe dream” are repeated ad infinitum, and characters tread the same ground incessantly -- there’s not a dull moment.