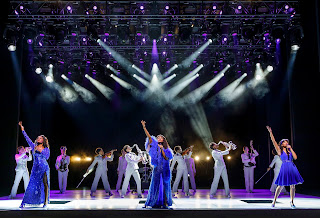 
This is a fitfully entertaining but woefully superficial jukebox musical built around the life of the late pop idol Donna Summer, played principally by Broadway veteran LaChanze, but with the role shared by Ariana DeBose and Storm Lever in her earlier stages as, respectively, the disco diva and teenager.


The conceit isn’t very satisfying, and nor particularly is the gimmick of having other women in the cast play several of the men in Summer’s life.


The narrative, such as it is, charts the star’s career from choir singer to cast member of a European production of “Hair” (there’s a bit of “White Boys”) to fledgling Casablanca Records artist and stardom, and her courtship by and marriage to empathetic musician Bruce Sudano (Jared Zirilli) after enduring an abusive relationship.  I would have liked to have heard something about her other early musical theater work and her stint with the Vienna Volksoper, but that part of her life seemed to be of little interest to the creators.


The focus is squarely on the music the fans expect to hear -- and her hits are performed as book songs and performance - with a skimming-the-surface overview of her triumphs and difficulties including childhood abuse, domestic violence involving a German boyfriend (prompting a version of her partnering with Streisand hit, “Enough is Enough”), her seemingly anti-gay statement (“God didn’t make Adam and Steve”) which caused an outcry by her fans at the time, but explained here as merely an idle joke in performance when the men in the audience were drowning out the women during an impromptu singalong, her lawsuit against Casablanca and its head Neil Bogart (Aaron Krohn) and her cancer diagnosis.


LaChanze and DeBose are very good indeed delivering the Summer hits in strong voice and suggesting her manner without, of course, being the real deal. I had the pleasure of working with Summer at a press junket a few years ago, and watching her rehearse and then wow the press corps later that evening, I was struck by the unique timbre of her voice. It was really quite thrilling. None of the ladies onstage quite captures that, but they’re close enough in this context.


And on its own terms,  it’s heartening to have the talented LaChanze -- original star of “Once on This Island” and “The Color Purple” -- again starring in a big Broadway musical.


“Summer” is at its best when, in the last minutes of the intermission-less show, the disco balls descend and we get full-out renditions of two of the star’s most iconic hits, “Hot Stuff” and “Last Dance.”


Sergio Trujillo, who supplied the flashy moves for the Gloria Estefan musical “On Your Feet,” provides comparable period moves for his cast here. Distinguished director Des McAnuff, who guided the infinitely superior “Jersey Boys” to long-running success, does his best with the lightweight material here.


The book by Colman Domingo, Robert Cary, and McAnuff himself, has none of the substance of the one Marshall Brickman and Rick Elice penned for “Jersey Boys” or Douglas McGrath for “Beautiful: The Carole King Musical.”


Robert Brill’s scenic design with rising platforms for the three ladies is artfully spare but appropriately flashy, while Paul Tazewell’s costumes capture the fashion flavor of Summer’s heyday. Howell Binkley’s lighting does its best to emulate the Studio 54-era vibe.


Photo by Joan Marcus. LaChanze, Ariana  DeBose, Storm Lever and company
Print this post
Posted by Harry Forbes at 5:19 AM