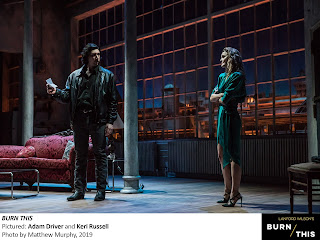 
This a polished and highly entertaining revival of Lanford Wilson’s 1987 play about a phobic restaurateur named Pale (Adam Driver) who early one morning bursts into the lives of the roommates of his late dancer brother Robbie who was killed in a boating mishap: Anna (Keri Russell), a dancer turned choreographer and Larry (Brandon Uranowitz), a gay advertising executive. Improbably, especially as she’s dating Burton (David Furr), a well-heeled screenplay writer, Anna finds herself both repelled and attracted to the wildly unconventional interloper, creating major complications all around, including a New Year’s Eve confrontation between Pale and Burton, well staged by fight director J. Steven White.


But when the play opens, Anna is describing Robbie’s funeral from which she’s just returned. Robbie’s family apparently didn’t know or choose to know about his sexuality, and she describes how awkward the situation was for her. Sometime later, when the cocaine-fueled Pale bursts in to collect his brother’s things -- a veritable force of nature, crying, cursing, and carrying on, brilliantly played by the hulking Driver who seems to tower over everyone else on stage -- he and Anna bond in their mutual grief. Driver and Russell play beautifully together, and their burgeoning relationship is most convincing and touching despite the disparity of their characters (and sizes).


We’ve already heard Larry summarize the plot of Wagner’s “The Flying Dutchman,” laying the symbolic seeds for this story of a modern day Dutchman and Senta.


Uranowitz as the wise-cracking roommate delivers his humorous dialogue with masterful comic timing, and Furr, at first clueless about what has transpired between his girlfriend and Pale, plays his WASPy part to a tee. And his recounting of a one-time-only gay encounter on a snowy night years before is very funny.


I can’t claim total recall of original cast member John Malkovich’s performance apart from admiring it very much. But Driver certainly has made the part his own. Till now, he’s been seen almost exclusively in English roles in New York (“Man and Boy,” “Mrs. Warren’s Profession,” and “Look Back in Anger”), so seeing him playing this uber blue collar character is quite the change of pace.


He balances Pale’s craziness and tenderness very skillfully indeed, making him something of a gentle giant. (I loved the scene of him showing Larry how to make a proper cup of tea, demonstrating a surprising domestic touch to Pale’s character.) And Russell hits all the right notes as the conflicted Anna, making her dilemma very plausible.


Director Michael Mayer must be credited with eliciting such fine performances from his cast, and he stages the action superbly for maximum humor and poignancy.