Lady in the Dark (MasterVoices) 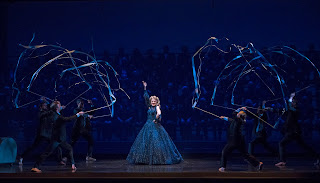 
Gertrude Lawrence’s 1941 megahit, “Lady in the Dark,” groundbreaking in its day for its then novel use of psychoanalysis in dissecting its fashion magazine editor heroine’s romantic and business indecision, might register as hopelessly dated today despite the quality of Moss Hart’s book, and the fabulous score by Kurt Weill and Ira Gershwin.


When Encores revived it in 1994, Stephen Holden in "The New York Times" dubbed it “at once charmingly quaint and naively sexist.” And he said it seemed all its protagonist Liza really needed “to straighten out her life is a good roll in the hay.”


But on this occasion, conductor and director Ted Sperling, MasterVoices’ artistic director, has done a, well, masterful job in all departments. The script -- the world premiere of a new adaptation by Christopher Hart (son of Moss) and Kim Kowalke -- plays very well indeed. And nothing’s been radically altered, nor did it need to be. Liza has plenty of agency, as indeed she very much had in the original production. Listen to one of Gertrude Lawrence’s radio broadcasts of the show, and you hear as much a strong-minded independent career woman as Victoria Clark played her here.


The curtain rises without music, as Liza enters Dr. Brooks’ office for the first time, and the action proceeds as if a straight play. Thereafter, Liza’s In the Glamour sequence, Liza envisions herself the toast of the town giving a speech at Columbus Circle and having her portrait painted to adorn a two-cent stamp. In the Wedding dream, she envisions her impending nuptials. And finally in the Circus sequence, she is put on trial for her notorious indecision.


The work’s structure is unusual in that the real-life story -- all the scenes in Liza’s magazine office, and her psychiatrist sessions -- are played without any music at all, and all the musical numbers are contained in three lengthy operetta sequences.


The show is, in fact, rife with operetta references, as critical edition co-editor Bruce D. McClung points out in his fascinating introductory essay. He cites a parody of the opening male chorus of Sigmund Romberg’s “The Student Prince” for “Oh Fabulous One.”  And the verse of “This Is New” with its reference to “the Pleasure Dome of Kubla Khan” suggests the exotic locales often used in American operettas, with the foxtrot-ballad refrain also in the operetta tradition. “The Trial of Liza Elliott” pays homage to Gilbert and Sullivan’s “Trial by Jury.” And, the Ringmaster’s “The Best Years of His Life,” McClung continues, bears echoes of the sort of ensemble waltzes heard in European operetta ﬁnales.


In the final circus sequence, there’s even a direct quote from “The Mikado”:


To which the Ringmaster responds:


“This is all immaterial and irrelevant
What do you think this is - Gilbert and Sullivant?”


Victoria Clark was Liza Elliott, and though she may not quite possess the glamour and mercurial magic of the inimitable Lawrence, she’s about as fine an exponent of the role as we’re likely to see nowadays, giving a first-rate dramatic performance, and singing the songs with infinitely more secure tone than the great Gertie. So, too, her vocal style is far more apt than that of Maria Friedman heard on the most complete recording of the show from the 1997 National Theatre cast album. From her breezy first solo, “One Life to Live” through “The Princess of Pure Delight” to the jazzy “Saga of Jenny” (not quite bumping and grinding as Lawrence was said to have done), she sounded superb. And “My Ship,” the dream melody from childhood that haunts Liza throughout the show, until she finally recalls it near the end, was exquisitely sung.

She was glamorously outfitted by three top designers for each of the dream sequences: Zac Posen, Marchesa, and Thom Brown respectively. Tracy Christensen designed the attractive period costumes for the non-fantasy scenes.


David Pittu was outstanding in Danny Kaye’s original role of campy fashion photographer Russell Paxton, and tossed off the show’s penultimate showstopper, “Tschaikowsky” with tongue-twisting panache. Ben Davis, fresh from his outstanding work as Cosmo in Encores’ “Call Me Madam,” confirmed his stature as one of today’s go-to musical leading men as movie star Randy Curtis who has all the ladies -- and, amusingly, even Russell -- agog. (“Heaven,” Pittu sighs at one point after an encounter with Curtis.) Davis’ principal vocal moment, “This is New,” was strongly vocalized. 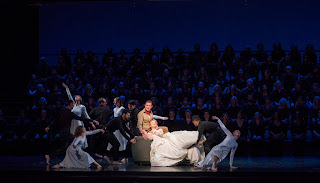 Ron Raines, no slouch at musical leading man roles, was solid in the mostly speaking role of publisher Kendall Nesbitt, Liza’s married lover whose imminent divorce -- along with her having to decide on which cover to use for the magazine’s upcoming Easter issue -- sets Liza into her emotional tailspin.


Given changing views on gender issues, it was quite a sensible idea to cast the therapist, Dr. Brooks, with a woman, and the fact that it’s Amy Irving no less is luxury casting. But Moss Hart’s script is far from an outdated relic, and the dialogue has substance and sophistication.


Sperling’s conducting of the score was simply ravishing with Weill’s sinuous orchestrations registering with crystalline clarity as played by the Orchestra of St. Luke’s. And Scott Lehrer’s pristine sound design merits a special shout-out. It was a pleasure to hear the lengthy Act II entr’acte, as there’s no actual overture before the show, though it was perhaps a mistake to keep the house lights up for most of it, as this encouraged talking. Sperling led his musical forces from the pit, unlike Encores’ usual custom of an onstage orchestra.


And the giant MasterVoices choir, articulating the thoughts in Liza’s head, made a wonderfully incisive and beautiful sound. Dressed formally in evening wear for the first act, they dressed down for the second, with many sporting patchwork circusy attire, and very much part of the action.


Doug Varone’s choreography for the dream sequences, including the second act “Dance of the Tumblers” added visual variety to a performance that was as much a pleasure to watch as to hear.


Having recently watched the dreary 1944 film with Ginger Rogers, in which director Mitchell Leisen eviscerated the score (only “The Saga of Jenny” and a bit of “Girl of the Moment” remain), it was a special pleasure to reacquaint myself with the unadulterated original. My off-air copy from AMC years ago had closing remarks by host Bob Dorian who cited a Moss Hart letter to Leisen praising the improvements that the director made to Hart's original script. Whether that story was true or apocryphal I cannot say, but as heard in this performance, I'd say the original script was uncommonly literate and strong.


Let's hope a CD of Sperling and company's exceptional work will be forthcoming. It would surely be the best version of the complete score yet.

(Below) Ben Davis, Victoria Clark and Doug Varone and Dancers in the Wedding Dream. Photo by Richard Termine.
Print this post
Posted by Harry Forbes at 2:49 PM